Footfalls of the Past[]

City of other Days[]

In the original version, the most common item treasures are Hi-Potions, Ethers and other common items. With the Diamond Armlet equipped, the common item treasure is a Knot of Rust and the rare item is a rare Mote. In the Echoes of the Times Garden, the treasure in the middle of the the east edge that can have the Opal Ring. The Colosseum has many treasures that spawn in the ruined hallways around the center. One treasure that spawns in the right dead-end in the south can have the Cloud Staff. The treasure near the southern entrance to the opening in the middle of the Colosseum can have the Penetrator Crossbow. Many treasures can spawn in the northeast of the City of Other Days and one of them can have the Ivory Pole.

In the Zodiac versions, the treasures are different. Echoes of Time's Garden can have armor pieces without the Diamond Armlet equipped, and the Colosseum can have weapons. The City of Other Days has two guaranteed accessories: Pheasant Netsuke and Gillie Boots.

City of Other Days[]

Pallicant will appear in the City of Other Days area when all enemies in the area are defeated and the player leaves, then reenters.

The Ridorana Cataract and accompanying Ridorana Lighthouse exist south of the country of Dalmasca. Legend says that it is an entrance to the Hell of Water. According to Jenomis cen Lexentale the cataract was formed from an explosion caused by a battle in the city of Goug that once stood on the island at the cataract's edge. The explosion disrupted the local aetheric flow, forming an extra-planal rift in the ocean. 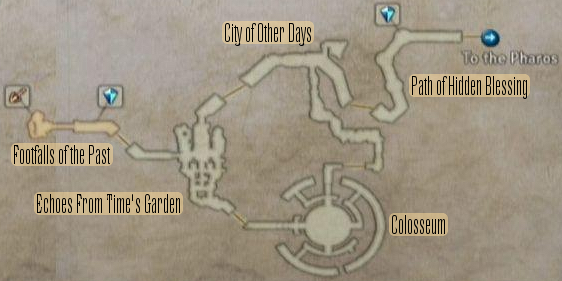