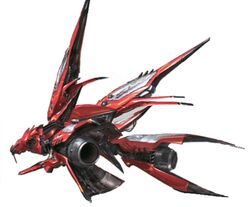 "Ride On" is the airship theme for Final Fantasy VIII. It is composed by Nobuo Uematsu.

"Ride On" plays when flying Ragnarok across the map. It starts playing when Selphie Tilmitt first starts to pilot it after Squall Leonhart and Rinoa Heartilly return from the Lunar Base. Composed by Nobuo Uematsu, it is the second track on Disc 4 of the original soundtrack.

An arrangement of "Ride On", called "Blue Sky", plays after Balamb Garden takes flight, but only if Rinoa is in the party.

The tune is vaguely reminiscent of "Spreading Grand Wings", the music played while riding a wind drake in Final Fantasy V, to which the ship itself bears a slight resemblance (it also shares similarities with the airship theme of the same game).

"Ride On" plays whenever the player launches the airship on the world map and will continue to play as the player explores its interior. In the original versions, when piloting the Ragnarok for the first time, the track is slightly longer, as when using it the other times cuts the intro. In Final Fantasy VIII Remastered, the full theme plays every time; this may be due to the sundry audio glitches found throughout the release.

"Ride On" plays in the music player after the player buys the Memories of FFVIII soundtrack from Hammerhead for 100 gil.

"Ride On" appears in its original form as downloadable content.

"Ride On" returns as a Field Music Sequence available in the base game and features the Ragnarok.

"Ride On" is a Field Music Sequence available by default.

"Ride On" is a battle music available from a Theatrhythm Final Fantasy event (November 2017).

An arrangement of "Ride On" appears in Final Fantasy Fables: Chocobo Tales as the theme that accompanies the final credits.

An 8-bit arranged version is included on the Final Fantasy VIII Chips album.