He is the last surviving dragoon from Deist, and the first Dragoon in the series. Dragoon went on to become one of the staple jobs in the series, many taking the name "Highwind" in either as their surname or as a name of an ability.

Ricard wears a dark suit of spiked armor. He carries a long spear or staff in different pieces of artwork. His helmet is decorated with dragon wings and has red eye slits in the PS/GBA versions. Ricard wears bronze and blue armor in his NES battle sprite and his portrait shows him with a visored helmet. A modified version of Ricard's battle sprite was used for the Dragoon class in Final Fantasy III. His sprites in the PlayStation Portable version resemble Kain Highwind from Final Fantasy IV.

Ricard initially does not believe that the dragoons are extinct since he is a dragoon himself, struggling to accept that he could be the last of his kind. After learning the truth, he becomes determined to fight against the Empire. Being a dragoon, he is able to form a fast bond with a wyvern. He later protects the party by creating a diversion to let them escape by the wyvern.

Ricard was ordered to find the Ultima Tome, but his ship was swallowed up by the Leviathan. He meets Firion inside the sea monster where he protests to the idea of dragoons being extinct since he's a dragoon himself. He joins forces with Firion, Maria, and Guy. A Roundworm blocks their way to the ship and after they defeat the worm, they get out of the Leviathan and sail to the Mysidian Tower. At the top they reach the sealed door leading to the tome. Minwu is already there and tells them to stand back while he focuses his remaining energy on opening the door and dies as a result of over-exertion.

The group travels to Fynn where they are informed of the Emperor's Cyclone. They use a pendant found on another dragoon's corpse on a large mirror in Fynn Castle to summon the wyvern whose egg they had protected by transporting it to Deist's cavern's spring. Ricard and the wyvern form a connection.

If the party travels to Deist, Ricard learns from Elina, the widow of his dragoon friend Phillip, and her son, Kain, that the dragoons and their wyverns were massacred by the Palamecian army, leaving them as the only survivors. Ricard promises to return after defeating the Emperor and they will be a family. Ricard, accompanied by Firion and his party, flies on the wyvern into the Cyclone and together they defeat the Emperor.

When Leon attempts to assume the throne of Palamecia, the heroes confront him. When the Emperor returns from the dead as the Dark Emperor, Ricard attacks him to create a diversion while the others, accompanied by Leon, are picked up by the wyvern and escape. Ricard is no match for the undead Emperor and is slain. If Firion returns to Deist to break the news to Ricard's adoptive family, they will tell him they are leaving Deist for the many painful memories there. In parting, they give Firion the Excalibur.

In the Dawn of Souls and later remakes, Ricard is in Raqia fighting a Roundworm similar to the one he fought in Leviathan when Minwu and the others join him. After defeating it, they try to figure out where they are. They confront the Light Emperor who asks for their forgiveness, but images of Elina and Kain tell Ricard not to be fooled by him, because the Light Emperor is as evil as his dark side. Ricard summons the will to fight the Light Emperor and defeats him and finally rests in peace knowing the future of the world is in good hands. 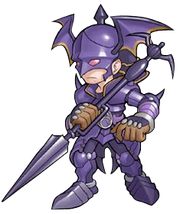 Ricard is a Dragoon, and as such in the Dawn of Souls and later versions, he starts with a high skill level with spears and swords and a moderate shield skill level. In the NES and Origins versions, he has no proficiency with spears.

Ricard has high Strength and mediocre Stamina, Spirit and Agility. He is most suited as an attacker, as he has low MP when he joins and his low Magic stat means his MP will be slow to level up. His ultimate weapon in the Arcane Labyrinth is Abel's Lance, which helps his HP grow faster by boosting his Stamina. In Soul of Rebirth, his ultimate weapon found in the Unknown Palace is the Wyvern Lance.

The player may wish to equip Ricard with the Blood Sword if planning to play through Soul of Rebirth, as he will retain it when recruited and the sword is powerful against Ultima Weapon and the Light Emperor. This means the Blood Sword will be unavailable in the main game for the final dungeons and bosses. 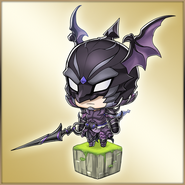 Ricard is a playable character. He is a Dragoon, whose combat role is Physical Attack.

Ricard appears on a Triple Triad card in the version available via Final Fantasy Portal App.

In Dissidia Final Fantasy, his Player Icons give his name as "Richard."

Ricard appears in Final Fantasy: Memory of Heroes during the Final Fantasy II adaptation, in a role similar to the original game. As Ricard is present with Firion's party when they enter the Mysidian Tower, he is blessed by the crystals and becomes one of the Warriors of Light. Later, when Ricard holds off The Emperor, he transfers his blessing to Leon.

Ricard is the Catalan spelling of the name Richard. [view · edit · purge]Richard was originally derived from the Proto-Germanic words rīkô ("ruler") and harduz ("hard"), which is often translated to English as "powerful leader".

In the Dawn of Souls and later remakes, the son of a fellow dragoon was named Kain. When Ricard returns to Deist, the boy and his mother are the only survivors, and Ricard's death prompts Kain to follow in the Dragoon legacy. This is in reference to Final Fantasy IV's Kain Highwind. In turn, the 3D remake of Final Fantasy IV alludes to this Easter egg, as Kain states his father died while fighting an empire, and mentions his father's name was Richard.

His name has also been translated as "Edward". [view · edit · purge]"Edward" is a common English given name that means "rich" and "prosperous"; several kings and nobles have shared this name.