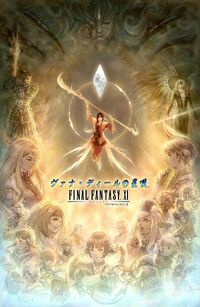 "Rhapsodies of Vana'diel" is the ending theme of the Rhapsodies of Vana'diel storyline of Final Fantasy XI, available in-game via the November 2015 version update. It is a vocal arrangement of "Vana'diel March". It was composed by Naoshi Mizuta and arranged by Mizuta and Takuro Iga. The lyrics were written by Yaeko Sato and it was performed by RiRiKA and MARiE of Phantasmagoric with the chorus performed by the Adventurers, the players of the game.

It is one of the tracks on the Final Fantasy XI Priceless Remembrance Blu-ray album.

The official lyrics were released on the Final Fantasy XI Priceless Remembrance album.

Unofficial English translation
When I set out
The only footsteps
Were my own.

Yet as I traveled,
Ever more voices were
Added to my chorus.

A chorus that echoed throughout
the land...of Vana'diel.

Adventurers...children of Altana...
Gather now, proud before the crystals.

Giving answers I never heard before.

Never had I felt so safe
As my spirit soared toward the sky.

Together we are more than when we stand alone
Protecting the land...of Vana'diel.

And we press ever forward...
And the sun never sets.