Cid Pollendina: Oh, shut up and help me remodel the Reynn page!
Please expand this article into a full one. The following tasks need to be completed:This request can be discussed on the associated discussion page. Remove this notice upon completion.

Amanda Leighton
Reynn is one of the main protagonists of World of Final Fantasy and Lann's older twin sister.

Reynn is a young woman with long strawberry blonde hair and blue eyes. She wears a high-collared pink tank top with white ruffles, a thick white and tan belt. She has a short black skirt with white sheer trim, with brown and tan ankle boots. She has black markings on her right forearm. In battle, she wears a large silver armor glove with a glowing blue gem on the back of the hand.

Reynn is Lann's exact opposite, doing everything with caution. One way or another, she shows her smarts. Her inquisitive nature allows her to analyze the situations she encounters with precision.

She shows her irritation when Lann acts too clueless, telling him to knock it off. When highly upset, Reynn often spouts specific trivia about a variety of topics, much to Lann's frustration.

Notes: Markings on her right arm / Lann's older twin sister / Likes to call the shots and keep Lann in line / Always on the ball / Almost makes up for Lann with her quick judgment and careful planning

Under Enna Kros's Watchful Eye
Enna Kros said that she "checked up" on Reynn and Lann during their slumber in Nine Wood Hills, but why? Did she feel some sort of strong attachment to them?

Hand-Picked
Despite her significant physical and emotional strength, Reynn is not invincible. She is particularity easy to wound, it seems, as you may have noted after she experienced the loss of her brother. However, Reynn rose above that moment of weakness and pushed forward, no matter how much it hurt--and this is exactly the kind of fortitude Enna Kros was banking on.

Enna Kros hand-picked Lann and Reynn, in fact, from among all the denizens of all the Realms of Final Fantasy. Perhaps she has other favorites we can meet in another tale.

Reynn's Future
The Reynn and Lann that were bestowed upon Hauyn as prismariums are, as it turns out, newly born Champions. But what of the Lann and Reynn who were sucked through the gate? That is a story for another time.

Hey, don't talk down to me. Listen, last time I checked, little bro, I've been around a few minutes longer than you.
— Voice 2

So, um, if we do manage to find all the lost Mirages... does that mean we'll be able to remember the things we forgot?
— Voice 3

Ugh... C'mon! Think about it! There's something...funny about Grymoire.
— Voice 4

Hey! Get those corners turned up!
— Voice 5

Both Lann and Reynn are without their memories and each carry a mysterious power in one of their arms. When that power is awakened, a piece of armor appears on their arms.

Reynn and Lann appear in their Lilikin forms as a single player character.

Reynn is a playable character who could be initially recruited during the Collector's Event, "World of Grymoire", as a First Time Reward for completing the event's Castle Cornelia - Hard stage in Part 1.

Reynn appears with Lann as a supporting character. 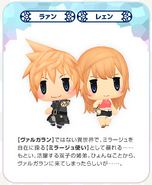 Reynn appears on Triple Triad cards in the version available via the Final Fantasy Portal App.

Reynn in her Lilkin form makes an appearance in Kingdom Hearts Union χ[Cross] as an obtainable headgear as well as a medal. 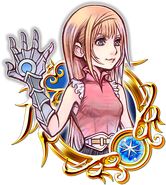 Reynn and Lann appeared as part of the Final Fantasy collaboration.

Lann and Reynn engage in a comedic back-and-forth banter known as manzai, with Lann serving as the boke (funny man) and Reynn as the tsukkomi (straight man). This style of comedy involves a lot of misunderstandings, double entendres and puns and the developers requested the essence of the original script remain intact for the localization.[1] 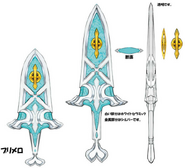 Introduction as "The Sister".

Lann and Reynn with Tama.