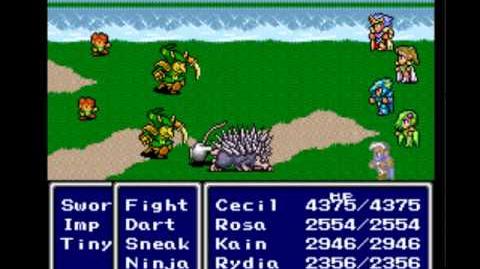 The glitch occurs in the SNES version of Final Fantasy IV and involves having a character use Life or the Life1 item on an enemy who is about to die (best done by using the Weak spell on the enemy). When the enemy dies, the character will use the spell or item on the enemy and revive it, but due to a glitch all revived enemies will come back with 0 HP, and thus, it will die again immediately.

In both instances, the revived enemy counts as defeated, can never be targeted, and will never attack. The battle is won after killing all other enemies. The revived enemy remains onscreen even during the victory fanfare.

The glitch can only be created by X-type Death weaponry (Assassin's Dagger, Ichigeki, Wing Edge, and Viper Darts) and multiple hits (Dragon Horn or Master's Scroll) because it requires multiple kills to witness. The player should cast Reraise to a living enemy and kill it along with an undead enemy in the same turn with something like Ichigeki/Master's Scroll combo. When the revivals take place, the undead monster(s) will return and Reraise will activate. For whatever reason, the game "forgets" to restore the living monster's graphics when this occurs, rendering revived living monsters Hidden, making it un-selectable and renders it un-hittable.

A second glitch involving revival, if the player casts Reraise on an undead enemy, this can be done by casting Confuse for a direct cast or simply have either Strago or Gogo use Rippler to trade the Reraise status. The player must strike it with any instant death weaponry or the Death spell, both of which will revive undead enemies. The enemy will die, come back to life, trigger the Reraise status on itself, and die again. This does not work on undead character(s) equipped with the Lich Ring because they do not go through a special death or revival sequence.

If Banish hits a monster, the monster's graphic will disappear since they die. However, if the player or another monster revive the enemy target, or they had Reraise and are revived automatically, this becomes a problem, as the player will no longer be able to manually target that particular enemy. This doesn't affect anything but that particular monster.

There are no additional spoils for killing an enemy more than once, however.