Morning Star
Reuben is one of Benjamin's four allies from Final Fantasy Mystic Quest. He hails from the town of Fireburg and wields a Morning Star. He is devoted to his father and hometown, but is unsure of how to save them.

Reuben wears armor from head to toe. Most of it is bright red, but his helmet and breastplate have white highlights and the tassets are entirely white. The upper half of his breastplate is light blue and there are blue highlights on his leg armor. His helmet has a yellow crest on the front. Reuben's hair and eyes are both brown, although his hair is mostly hidden.

Reuben is dutiful and determined in trying to rescue his father and keep him safe, but he is reckless himself. He insists on fighting a monster alone and is thrown off of a ledge. He also covers the extent of his injuries so that Benjamin will go on with the quest, and he ignores his injuries to help Benjamin find Captain Mac, until he collapses and is forced to recover in Windia.

Benjamin meets Reuben in Fireburg, where Reuben tells Benjamin his father knows the location of the Fire Crystal. However, his father is trapped in a blocked off mountain pass, so Reuben accompanies Benjamin through an abandoned mine to reach the cliff and blow up the boulder blocking the path. The two continue on to the volcano, where they slay the Dualhead Hydra and restore the Fire Crystal.

After the two continue on to the Windia region, but Reuben is attacked by a monster on the Rope Bridge and knocked off onto a ledge. Hurt but alive, he tells Benjamin to continue on while he finds a path back to land. What Reuben discovers is a hidden entrance to the Focus Tower, leading into Doom Castle. He returns when Benjamin defeats Pazuzu and helps him rescue Captain Mac. However, the fighting causes his injuries to act up, so he remains bed-ridden for the rest of the game while Phoebe accompanies Benjamin to Doom Castle.

Reuben's weapon of choice is the Morning Star which acts like an axe weapon, as such it's effective against tree-type, crab-type, turtle-type, and worm-type monsters. His Flame Armor provides protection from Fire attacks.

The following is Reuben's raw stats before weapon and armor modification. 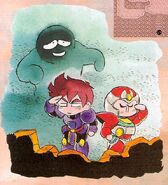 Walking through the Volcano gas.

According to the Book of Genesis, Reuben was the first and eldest son of Jacob with Leah. He was the founder of the Israelite Tribe of Reuben.

Red is a primary color that seems to have been chosen as a name for the character due to his association with fire and lava, as well as his red armor. It is somewhat more common as a nickname as opposed to a proper name. Since red is the color of blood, it has historically been associated with sacrifice, danger, and courage.

Reuben's Japanese name, Red, appears in other Square work for characters besides Final Fantasy. The hero of Treasure Hunter G and one of the heroes of SaGa Frontier. There's also Red XIII from Final Fantasy VII. Red is often used for a name of a hot-blood character archetype.