The Returner Hideout, also known as Returners' Hideout, is a location in Final Fantasy VI where the Returners, a resistance group formed to counter the Empire, has its headquarters. It is located in the Sabre Mountains, and contains a shop and an inn. The Lethe River flows past the hideout, and the Returners keep rafts so they can escape in an emergency.

Edgar, Locke, and Sabin bring a girl named Terra to the hideout so they could introduce her to Banon, head of the resistance group, due to her unheard-of ability to use magic and seeming ability to communicate with espers.

Banon believes Terra is the Returners' hope to push back the Empire and stop them from conquering the world, but Terra is uncertain if she wants to get involved in the war. While the group is at the hideout, the Empire conquers South Figaro and begins a march on the Returners. With their hideout in jeopardy, Terra flees down the Lethe River with Edgar, Sabin, and Banon, while Locke returns to South Figaro to sabotage the Empire's advance.

In the World of Ruin, the approximate location of the Sabre Mountains is covered by ocean, and the Returner Hideout has presumably sank beneath the waters during the cataclysm.

A pot in the main room contains a Green Cherry. Banon's room has a chest with a Hi-Potion, and the room Terra rests in has a Phoenix Down. A rear storage room has three chests with a Phoenix Down, Knight's Code, and Air Knife, and the containers in the room contain an Ether and an Antidote.

There is a hidden passage in the storage room leading to one more treasure. On the right side of the pile of crates, the player can walk into the wall down and to the right, eventually finding a chest with a White Cape, a rare and valuable Relic at this early point of the game.

Depending on the player's choices in helping Banon or not, they can receive a Genji Glove or a Gauntlet. The Gauntlet is received by agreeing to help Banon, while the Genji Glove is received by saying no to him three times, or by saying no once and then speaking to a Returner in the storage room. The player can only acquire one of these Relics; if they acquire the Genji Glove from the Returner and then agree to help, Banon will not give them the Gauntlet.

Which item to take is a matter of personal preference, though a point of note on rarity - the Gauntlet is a very rare relic only obtainable at two other points much later in the game, while the Genji Glove is farmable. Additionally, the player can find a Genji Glove in the Cave to the Sealed Gate, much sooner than they will have a chance to get a Gauntlet if they pass up the one Banon gives them.

When Terra is alone in the party, a Scrap of Paper can be found hidden next to the table in the Returner Hideout prior to the meeting that takes place with Banon. The player has the choice of either leaving the piece of paper on the floor or tossing it in the trash. Choosing to leave the paper on the floor will make Banon say a few more lines before the start of the meeting which will make Terra chuckle. The Scrap of Paper is a key item and because of it being associated with an event, regardless of the player's choice, it is not added to the key item inventory.

Finding the scrap of paper or not has no impact on gameplay or story beyond the brief addition of Banon noticing it - it is merely an odd easter egg.

When the player reaches the Returner hideout, they ask Terra to consider joining them to help combat the Gestahlian Empire and perhaps learn more about her powers. After speaking to Locke, Edgar and Sabin throughout the hideout, the guard at the door lets her step outside to speak to Banon, who asks if she will aid them.

If the player agrees, Banon will give Terra a Gauntlet. If the player refuses three times, or if they refuse once and then speak to the Returner in the storage room, they receive a Genji Glove.

If the player agrees to aid Banon, a prolonged scene will occur of the Returners meet to discuss what to do, which is interrupted when a wounded Returner arrives and informs them that South Figaro has been invaded by the Empire. If the player answers no to Banon three times, this scene is skilled to the arrival of the wounded Returner. Afterward the decision is made to flee to along the Lethe River. The player is then put in charge of a party of Terra, Edgar, Sabin, and Banon, in the back hall of the hideout.

When the player boards the raft on the river, it is an instant Game Over if Banon is ever KO'd. The player may wish to go outside to the world map where enemies are not as powerful and level grind a bit for safety. Be aware however that even though the game has not informed the player not to let Banon be KO'd, the condition is applicable as long as he is in the party, so if he is defeated outside it will still be a Game Over.

After the Battle for the Frozen Esper, the imperial blocking access to Mt. Kolts leave, and the player can take a long walk back to the hideout through the South Figaro Cave and Mt. Kolts, and board the raft on the Lethe River again. The raft disembarks them at Gau's father's house. At this point, traveling far south past Doma Castle and the Phantom Forest to Baren Falls, where they can leap off to the Veldt. To get back to Figaro, they can leap into the Serpent Trench to Nikeah and board a ship to South Figaro. This is a long journey, but it allows the player access to the Veldt to continue building Gau's skills before they acquire the airship.

Once Mog has joined the party, he can learn the Water Harmony Dance by going down the Lethe River or fighting in the Serpent Trench. Therse are the only two ways the Dance can be learned in the Super Nintendo and Playstation versions; in the Advance version and mobile and Steam releases, the battle with Leviathan is the third way. However, there is a quicker way to learn the Water Rondo now that the player has the airship, so going down the Lethe River is more time-consuming. 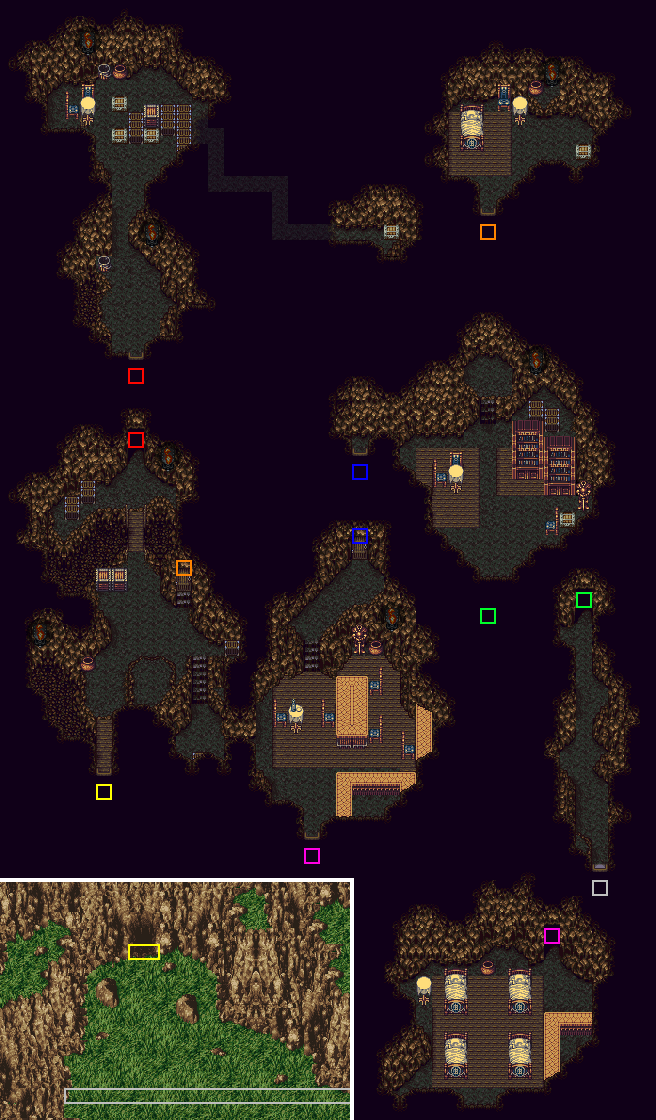 "The Returners" from Final Fantasy VI

"The Returners" is used as the main background theme for the Returner Hideout. "Awakening" replaces this theme during Terra's recruitment by the Returners. 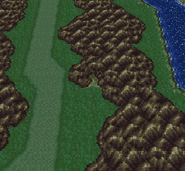 The Returner Hideout on the world map (SNES). 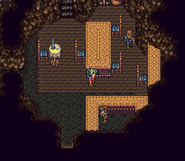 [view · edit · purge]Returner means "to go" or "come back", as to an earlier condition or place.

The Returners are trying to return things to the way they were before the empire's conquests, and return it to peaceful times. In the World of Ruin, the Returners' "spirit" lingers, with Celes saying she wants to return the world to the state before Kefka ruined it. Kefka brings death and destruction, while the party wants to return life into the dying world, finally materializing it in the ending.

The word "returner" is used throughout the game not simply referring to the organization, but many NPCs in the World of Ruin mention their wish to return to the "good old days" (the World of Balance).