Return Magic (魔法返し, Mahō Gaeshi?, lit. Return Magic), also known as Counter Magic and Magick Counter, is a recurring ability in the series. It typically allows the user to counter magic attacks used on them by using the same spell back at the enemy party. It differs from the Magic Counter ability in that the latter's counter is usually a physical attack, whereas Return Magic is similar to the Reflect status, only now also commonly consuming the party member's MP.

Counterattack using the same magick with which the user was attacked.

Magick Counter (also called Counter Magic) is a reaction ability learned by the Black Mage class for 800 JP. When an offensive magick is cast upon a unit with this ability, the unit will instantly counter with the same magick with same effect area regardless of casting range, given that the unit's condition allows them to do so, i.e. has enough MP, and not affected by ailments which prevent the user from casting magick. The user needs not to know the particular spell to be countered, which means the Bio spells, Unholy Darkness, Meltdown, Tornado and Quake, normally unattainable by the player, can be countered (used) with this skill too.

Magick that is self-cast, reflected (either being the one reflecting or attacked by the reflected), cast by Arithmeticks or weapon (except guns) will not trigger this ability. The magick of random tier shot by any of the three magickal guns can be countered and retained the same tier and effect area as if normally casting the Black Magick; thus, when Blizzaga is shot by the Glacial Gun, the ability user will counter the offender by Blizzaga with two grids of effect radius.

Although the Time Magick Quick has a positive effect, it can be cast back by this ability as well, allowing player to form an action cycle between two allies by casting Quick back and forth to surpass the enemies' speed.

Return Magic is a reaction ability learned by Black Mages and Bishops. It can be learned from the Black Robe for 300 AP. Spells are countered with the same spell. The caster does not need to know the spell. Some spells cannot be returned (such as Blue Magic).

Magick Counter is learned by Black Mages, Bishops, and Geomancer. It is learned from the Samite Coat for 400 AP. It counters magic with the same spell, assuming the user has MP to cast the spell with. 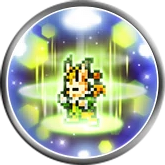