Retaliate (かまえる, Kamaeru?), also known as Counterstance, is a recurring ability in Final Fantasy series. It allows the user to counter physical attacks used against them.

Retaliate is the Monk job command. The command will allow the user to counterattack the next hit they take at double the damage they receive, while increasing the user's Defense plus their current Job Level.

Counterstance is a job ability learned by the Monk (level 45) which aims to increase the damage output of the Monk. This ability greatly increases their ability to Counter an attack, but it comes at an equally large drop in their defense stat. Functionally, this means that a Monk will potentially get a counter-attack every time they are attacked, thereby increasing his own damage potential and lowering the enemy's, but the moment they start getting hit, the Monk is going to lose hit points very rapidly. In addition, using the ability will raise enmity towards the player. It has a duration and a recast time of 5 minutes.

Automatically counter physical attacks received for the duration of the ability.

Counterstance is an active physical ability that allows the user to enter counterstance and retaliate against non-ranged attacks for 3 AP. It can be used by Iron Muscles, Master Tonberry★, Sky Dragon, and Yojimbo.

Retaliate counters physical attacks with magical attacks. It is used by Dark Fina and Dark Seabreeze Fina. Dark Fina's can be awakened to trigger more often and also buff her Magic when triggered. 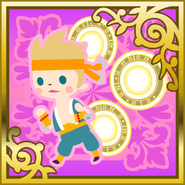 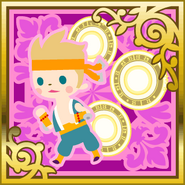