Unnamed leader, known only as "The Restrictor"

Deepground
The Restrictors appear in the online multiplayer mode of Dirge of Cerberus -Final Fantasy VII-. They are members of the 14th SOLDIER force, "Lost Force", and the former leaders of the Deepground before Weiss and his Tsviets took over.

Though many are hinted at, only one known member of the group is ever seen: their leader, simply called "the Restrictor". Nobody is sure who or what lies behind the mask, but from the voice he is male. He is voiced by Hikaru Midorikawa. His weapon is two short "gunblades".

Restrictor wears a long black coat he takes off only to fight. His face is never shown, because he always wears a mask covering his head. Even the Tsviets never knew who he was "behind the mask". He carries two pistols with blades attached to them.

He is said to be loyal to Shinra, but in Deepground is harsh and cruel toward his subordinates, not hesitating to beat and even kill them when they are not obeying him.

Through the brutal and inhumane experimentation and testing of Shinra's Deepground program, four individual SOLDIERs who survived its carnage, were recognized as the program's fruits of success. With their background information and traces of existence being highly classified and stricken from all known records, the group would come to be known by the overseers of Deepground as SOLDIER's secret 14th Unit, Lost Force. The confidential unit would prove their worth by destroying the 13th Unit, Ragnarok, in a single night. Ragnarok had discovered the amoral training program, and their shock and abhorrence at its purpose was a threat to Shinra's public face should word had gotten out.

The Restrictor leader governed over Deepground, implanting chips into the brain stems of all recruits so they couldn't turn against him. Recruits had to fight to the death to go up in the ranks, until reaching the rank of Tsviet, the highest and most feared. The Restrictors gave the Tsviets their color codes. Nero the Sable was chained up because he was considered too dangerous. The Player Tsviet in the multiplayer mode is the exception and without knowing, is part of Weiss's plan to take control of the Deepground.

Azul the Cerulean attempts to attack the Restrictor, but is stopped by the implanted chip which prevents recruits from attacking him. During a training exercise, the player grabs at the Restrictor's leg, showing how s/he is capable of hurting him.

Rosso the Crimson feels the need to slaughter countless Deepground soldiers because she wants to see the real sky and outside world, rather than a projection. She takes on the Restrictor, but after a short battle, the Restrictor lunges his gunblade into Rosso's stomach, and places a foot on her back as she falls to the ground.

Weiss is restrained by chains attached to the throne inside Reactor 0, but would like to try out his new swords. After the Restrictor breaks the chains, Weiss wants to fight him handicapped as he is confident he is more powerful. The Restrictor calls forth both Azul and Rosso, letting Weiss test his powers against them. Weiss beats them even while handicapped and with them in their Arch Azul and Bloodburst Rosso forms.

Weiss and his Tsviets turn on the Restrictor. Unable to attack him, Weiss orders the player to shoot him. The Restrictor proves powerful, but is defeated. He forces his short gunblade into the player's stomach and watches as s/he drops to the floor, fatally wounded. Weiss attacks the Restrictor, finally defeating their oppressor.

With the Restrictor dead, the Tsviets are in control of Deepground and the stage is set for their move to the world above in the main storyline in Dirge of Cerberus -Final Fantasy VII-. 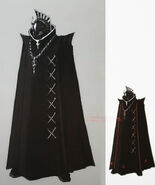