Reraise (リレイズ, Rireizu?), also known as Auto-Life and Life 3, is a recurring beneficial status effect in the series, usually bestowed by the spell of the same name.

When a character with the Reraise status falls to 0 HP they will automatically revive (without expending items or MP). The amount of health the character has upon revival varies by game. Reraise originates in Final Fantasy VI, and has since appeared in many other titles.

The Reraise status can be granted by the spell Reraise (Life 3 in the SNES and PS translation). It will automatically revive a fallen party member with barely any HP. There is no indication of a character having Reraise, as there is no visual changes to them. The status boosts the attacker's hit rate on the affected target by 25%, apart from the versions affected by the Evade bug.

Phoenix Down places a feather over Zack's head that revives him when he is knocked out. The status can also be obtained from a Shinra employee in the Shinra Building lobby at any time, by drinking the Potion, and from the Phoenix summon.

Phoenix Downs act as Reraise when used and will revive Vincent if he is knocked out.

Revival earrings accessory has the wearer start battles with Auto-Life. The accessory "breaks upon use" and is lost after the character is revived after falling in battle, and is thus something of a consumable item in comparison to the other accessories in the game. Equipping the accessory is the only way to gain the status.

Auto-Life is a status effect that revives the user on 1 HP, even f the character has Zombie, which makes it useful when paired with Quina's Limit Glove.

The Auto-Life support ability grants one instance of Auto-Life at the beginning of each battle, and it costs 12 magic stones to equip. Auto-Life is learned for 130 Ability Points from the Rebirth Ring, which can be synthesized with a Diamond and Anklet and 7,000 gil at Daguerreo, won from the Treno Tetra Master tournament, dug from the Chocograph 24, Forgotten Island, and stolen from Trance Kuja.

Quina can cast the Blue Magic spell Auto-Life, and Amarant has the Flair ability, Aura, which grants Regen and Auto-Life to the target; when in Trance he can bestow the status to all of the party at once.

There is no visual change to the character who has Auto-Life; a player can check if a character has the status through the use of a White Magic spell when all positive statuses should appear in the battle menu.

Auto-Life is granted via the spell Auto-Life and through the Mix ability Hyper Mighty G. The affected party member will automatically revive once KO'd with 25% of their max HP. A character with Auto-Life has a halo above their head, and triggering of the ability has the same animation as Life.

The HP recovered from Auto-Life starts at 25% max HP, and can be boosted by equipping the cast with a weapon with the ability Magic Booster. The Magic Plus % abilities on the recipient's weapon can further increase the HP recovery. In the best case scenario (the recipient has a max HP of 99,999 and an equipped weapon with Break Damage Limit, Magic +5%, Magic +10% and Magic +20%) the resultant HP recovery from Auto-Life will be:

The actual amount will be 50,622 because the game rounds off decimals each time the max HP figure is multiplied by the percentage. With Auto-Shell and Auto-Protect on armor, it is even possible to survive Penance's Mega-Graviton (damage equal to 75% of max HP) used by the Left Arm, and attack by the Right Arm respectively after being revived from Judgment Day.

Dispel doesn't remove Auto-Life, though several bosses can remove the status from characters: Th'uban, an optional boss in the Monster Arena; most of the Dark Aeons; and the Left Arm of Penance.

In the final battle, the party has a permanent Auto-Life status, and its effects are animated differently: it begins with a little mermaid-like sprite descending to the fallen character.

Auto-Life is granted via the spell of the same name, though the spell itself can only be used once the player goes through all colored gates on the Salvation Promised Garment Grid or the green node on Supreme Light. Auto-Life is also available from the Lady Luck's Magic Reels, in which rolling three Staves will cast Auto-Life on a random ally.

Reraise gives the caster the option to Raise themselves, should they be KO'd. It cannot be dispelled, but will be canceled by changing jobs. It takes effect after 10 seconds of being KO'd and lasts for 1 hour.

Status can be granted by

Reraise is a status bestowed on the party by Cactuarama's Uplift Feral Link. Upon a party member's defeat, they will be revived with a small amount of HP and lose Reraise status. The status also wears off after a short period. Its image is a pair of angel wings with a halo above it.

Caius bestows himself with Reraise with his Heart of Chaos during his boss fights. Unless the Paradox Scope is active, triggering the Reraise effect will end every fight, save for the last. In the Requiem of the Goddess DLC, if Caius uses the Heart of Chaos, he will revive after being defeated.

Reraise allows the player to automatically revive from KO, restoring 18% max HP. It is granted by the Reraise Potion.

While not technically a status effect, the pomander effect of Pomander of Raising in the

The Palace of the Dead will automatically raise the next party member KO'd.

Save the Queen areas, the Lost actions

Reraise effects, though with only a 70% and 80% chance of activation respectively.

Reraise status will automatically revive a fallen unit after their CT count reaches 100% during the dying status, rendering the unit active right after their revival. This is the first instance of not instantly reviving after being KO'd. The unit will revive with 1/10 of their maximum HP. If the recipient is Doomed, the Doom and Reraise statuses will nullify each other when the Doom counter reaches zero.

This status can be used via the White Magick spell of the same name or the reaction ability Dragonheart of the Dragoon class, triggered by any kind of damage.

The Angel's Ring accessory grants the wearer Reraise status once per battle and the Chantage (which is only equippable by female human class) will offer unlimited Reraise status, rendering the wearer never to be crystallized or turned into a treasure box.

If an undead character has Reraise (this can only be accomplished with Auto-Reraise), Reraise will have no effect other than to prevent the player from seeing the Dead counter, and to block the 50% chance of auto-revival normally associated with Undead status.

Once KO'd, the character will be revived automatically, as though they had the Life spell used on them. The Titania's Angel Whisper, which can be learned as Blue Magic, also grants Auto-Life while also healing HP, and the Defender's Aura will grant this as well as Regen. The Dragoon's Dragonheart reaction ability also grants them Auto-Life when they suffer a weapon attack.

The White Magick Reraise, the Blue Magick Angel Whisper, the Aura ability of Defenders, and randomly from the ability Nameless Song that Hurdy uses. Even if the Judge has left due to the law being broken, Reraise will still revive a party member.

Reraise is granted by Phoenix Pinions, Anima Lanterns, and the Reraise spell. The Reraise status gives the character a golden hue and revives them when they die. During missions this still counts as a casualty.

A temporary Reraise is granted by Rem's Undying Wish ability and the Vermilion Bird spell.

The Second Chance ability of the Phoenix Pinion accessory converts a fighter's Bravery into HP when the fighter loses all of their HP. However, this is not a perfect Auto-Life, as it does not work if the fighter has no Bravery, nor if the opponent has the "No Chance" ability blocking Second Chance.

Reraise is a status granted by the Phoenix summonstone. The user becomes immune to BRV Break for the duration of the summon. If the user's Bravery is reduced to zero (or below), it simply resets back to their base Bravery and the other fighter does not take the Stage Bravery pool.

Reraise status can be granted in two ways, by using the triple tech Lifeline through (Crono, Marle, and Robo) or through the Green Dream accessory. When the character is KO'd, he/she is automatically revived.

Using the Salve-Maker's Compounding ability to combine a Hi-Potion and an X-Potion causes the Font of Life effect, which grants Reraise status.

There is no Reraise status in Final Fantasy VII, but there is an "Auto-Life trick" that involves equipping a reviving Materia (Life or Phoenix) with the Final Attack Support Materia; this will revive a fallen character as soon as they die, but they must have MP prior to their death for it to work. 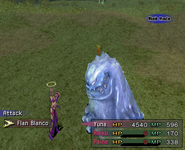