Requiem (破滅の歌, hametsunouta?) is a recurring ability in the series.

Requiem is an ability of the Sing command, accessible only by the Bard while equipped with the Lamia Harp.

It inflicts damage to an enemy equal to a percentage of their HP, which uses the following formula:

Requiem is an ability of the Sing command, accessible only by the Bard. Requiem is learned In Quelb by talking to the chanting wolves in the top right corner.

Dire Dirge is a level 20 ability for the Bard for 490 AP, which deals damage equal to each target's Max HP minus their current HP. 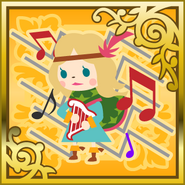 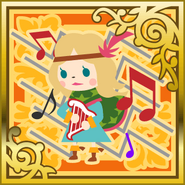 [view · edit · purge]A Requiem is a liturgical service of the Roman Catholic Church celebrated by the priest presider for the repose of the soul of a particular deceased person or persons.

Sing
Retrieved from "https://finalfantasy.fandom.com/wiki/Requiem_(ability)?oldid=3236693"
Community content is available under CC-BY-SA unless otherwise noted.