But what can we do? We're just remnants... merely remnants of Mother's legacy. Until we find her and receive her cells, we can't be whole again!

The Remnants of Sephiroth (also known as the Silver Haired Men) are a trio of young men that serve as the primary antagonists of Final Fantasy VII: Advent Children. Formed by Sephiroth as physical manifestations of his will from within the lifestream, the remnants are each a fragment of his will and serve to enable his physical resurrection into the world. The original Japanese word used is shinentai (思念体), meaning "thoughtform", referring to a physical manifestation of a thought or consciousness.

The three who walked upon the planet's surface were not him, and yet, they were. Created by the force of his will alone, deviations from the order imposed by the planet, they were at once real beings and fantastical monstrosities.

Sephiroth, On the Way to a Smile,

Like Sephiroth, all three wear black in a similar style as their progenitor, have silver hair, green cat-like eyes, and are left-handed. The remnants are implied to help strengthen Sephiroth's spirit within the lifestream by finding others who know of him and reminding him who he used to be in life. As they are formed from spiritual energy, they are not complete copies of Sephiroth and are solely guided by their instinct to find Jenova.

As such, the remnants indicate being different from Sephiroth, who acknowledges the remnants as avatars of himself yet their own separate entities at the same. Kadaj claims to Rufus he does not even know Sephiroth, but can sense his presence and is distraught over "Mother" choosing Sephiroth as her son over him. Loz and Yazoo do not indicate one way or the other if they are aware of Sephiroth's existence. While the remnants wish to find Jenova, they do not appear aware of why they want to; Loz and Yazoo tell the Turks "she'll fix everything" and other equally-vague statements. Kadaj tells Rufus that when they find "Mother", they will conquer the Planet, which echoes Sephiroth's ultimate goal to control the Lifestream and take control of the planet to carry on Jenova's legacy.

However, Kadaj appears not to know what to do with Jenova's remains when he acquires them. Upon Cloud explaining "a remnant wouldn't really know", Kadaj does not object and bitterly asks "So what if I'm a puppet?", indicating he is aware of his ignorance.

The remnants refer to Jenova as "Mother", indicating that, like Sephiroth before the Nibelheim incident, they believe Jenova is their actual mother. Although they know her true name, as shown by their reactions to Reno's comment about Jenova during their battle with him and Rude, they are otherwise unaware of her state. After Rufus shoots the box containing her remains, which is little more than a few remaining cells, Kadaj is horrified upon seeing what is left of Jenova.

What the remnants had originally planned to do with Jenova is unknown, if they had any plans to begin with. Through Geostigma, Jenova had infected many people, mostly children, with her cells. Kadaj indicates to Rufus and the children that this means they are, in essence, Sephiroth Clones, and thus needed for the "reunion", as the Remnants themselves have no reunion instinct since they have no Jenova cells in their bodies. Kadaj, in desperation during his battle with Cloud, absorbs the remains of Jenova and transforms into Sephiroth, acting as his host body. This may have been the remnants' purpose all along, even though they were not aware of it.

In "Lifestream: Black", it is revealed that Sephiroth tried to create an avatar of himself, but as his memories are fragmented, he is unable to. Sephiroth searches the Lifestream for other people's memories of him, and uses them to craft the three remnants to search for Jenova so he may be fully reborn. Final Fantasy VII: Advent Children Complete establishes that the Remnants are only two weeks old chronologically during the time they attack Edge.

Final Fantasy VII The Kids Are Alright: A Turks Side Story[]

Prior to the events of Final Fantasy VII: Advent Children, Kadaj operates alone in his efforts to find Jenova, gravely injuring Dr. Drake and stalking Evan Townshend and his partner Kyrie Canaan while they search for Evan's missing mother, Annette. They learn that Annette had been sent north of Icicle Inn to recover the Sephiroth Clone test subjects who had gone missing from Nibelheim.

After battling the Turks on the Great Glacier, Kadaj pursues Evan and Kyrie into a crevasse that opens up beneath the snow, leading to a mako cavern that contains the dead bodies of Annette and the test subjects. Among the possessions Evan finds on her body, he discovers a small piece of Jenova's still-living flesh wrapped in a handkerchief; Evan kicks it into the lifestream and Kadaj dives in after it, dissolving.

All three remnants manifest together in the Northern Cave, where they ambush the Turks and capture Tseng and Elena while Reno and Rude escape with a box containing Jenova's cells.

The remnants travel to the outskirts of Midgar, where they attack Cloud, believing he may also be guarding Jenova's remains, though soon retreat. Afterward, they interrogate Rufus about the whereabouts of Jenova. Rufus claims ignorance, but they do not believe him. In the city of Edge, the remnants kidnap several children with Geostigma, a disease caused by an infection of Jenova cells, and take them to the Forgotten City, where Kadaj activates their latent "reunion instinct".

With the children's ability to sense Jenova's presence, they lead the remnants back to Edge, and the trio attacks the city to force Rufus to reveal where he has hidden Jenova. Rufus reveals Jenova's remains under his cloak during the battle, which Kadaj salvages. In the ensuing chain of events, Loz and Yazoo are apparently killed, and Cloud battles Kadaj alone. After Cloud gains the upper hand, a desperate Kadaj absorbs Jenova's cells, allowing Sephiroth to take control of his body and reshape it into his own image.

After Sephiroth is defeated, a wounded Kadaj hears Aerith Gainsborough's voice, whom he believes to be Jenova. Aerith comforts him and calls down healing rain, and Kadaj, while reaching for a hand only he can see, allows himself to dissolve into the lifestream. Loz and Yazoo unwillingly follow soon after, attempting a final attack on Cloud. With the three remnants dead, although it is unknown what this means for Sephiroth himself.

The remnants were created early during the plotting stage of the movie and were designed by Tetsuya Nomura. To fit the film's theme of "children" , the remnants were designed to be younger than Cloud.[1] In contrast to the the children Cloud protects, the remnants symbolizes “children that were brought up without any love.” Despite the remnants' sinister origins and violent personalities, Nomura and Kazushige Nojima notes that Kadaj and his brothers are "pure" in the sense, as they are very "children-like" and aspects of their characters are akin to young boys.[2][1]

While Kadaj is one to bring Sephiroth back by absorbing Jenova's cells, the staff originally toyed with an idea that all three remnants would unite together to form Sephiroth, but was rejected it because they found "too comical".[1] 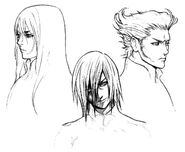 CG promotional image of the Remnants.

CG render of the Remnants. 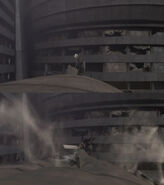 The remnants watching Cloud from a cliff.

Kadaj, Yazoo, and Loz at the city lake.