The hidden temple, Remiem. I'll be waiting. Come, and I will train you.

Remiem is an abandoned temple of Yevon on the southeastern side of the Calm Lands in Final Fantasy X. The path to the temple is located near the entrance to the Macalania Woods, but can only be accessed by riding a chocobo, and it is thus an optional location to visit.

It is the only remaining sign of a prewar city in the Calm Lands. No living people in Spira continue to visit the temple, and the only inhabitants are the unsent summoner Belgemine and the fayth of the aeon Magus Sisters. The temple is a large and ornate structure, which was once bustling, but became forgotten after Sin tore the earth asunder with the last of its strength while combating High Summoner Gandof.[note 1]

In Final Fantasy X-2, the temple has been sealed off.

Remiem Temple is located in the southeast of the Calm Lands. To find it, the player must follow the uphill cliff towards the south on a chocobo to find a yellow chocobo feather. The feather can be used to drop down and continue eastward to find the once secret location. Remiem Temple is surrounded by the same mountain range that Mt. Gagazet belongs to.

There is no Cloister of Trials as is typical to the other temples of Yevon. The temple itself is merely a large room with the entrance to the fayth at the end.

To receive the aeon, the player must complete three challenges:

The player can then break the seal guarding the entrance to the Chamber of the Fayth and obtain the Magus Sisters.

The player can continue to fight Belgemine's aeons (Yojimbo, Anima, and the Magus Sisters will only appear if Yuna already has them). When all the aeons are defeated, Yuna can send Belgemine to the Farplane. After she is gone, Yuna will obtain the Moon Sigil for her Celestial Weapon, Nirvana.

The player rides a chocobo through the maze of platforms below the temple and has to reach the finish mark at the bottom before the opponent chocobo. The first time the player wins, they will get the Cloudy Mirror, which can be upgraded to the Celestial Mirror in the Macalania Woods. The chocobo race can be run numerous times for additional prizes, but each prize can only be won once for a total of five prizes. The more touched chests, the better the prize. A good strategy is to try to obtain 5 chests, then work down, as it gets easier to obtain fewer chests every time.

If one manages to open all six chests by increasing the chocobo's speed via hacking, the reward is only a Potion, just like when opening the same number of chests twice, or hitting at least one colored pole.

Opening five or more treasure chests while still winning the race in the Final Fantasy X HD Remaster version earns the trophy/achievement Chocobo Master. This can be gained even by hitting poles. 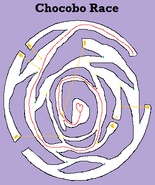 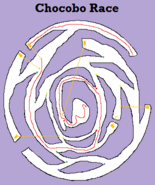 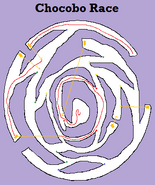 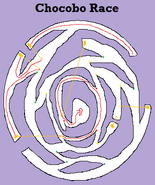 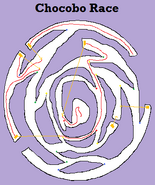 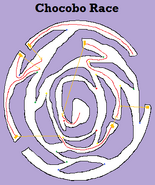 "Gloom" plays when inside the temple. "Chocobo Jam" plays during the chocobo race.

The sealed door of the Chamber of the Fayth.

The fayth of the Magus Sisters. 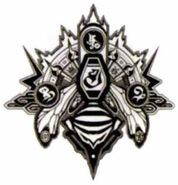 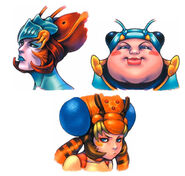