A tincture that cures what ails you.

The Remedy (万能薬, Bannōyaku?), also known as Cureall and Heal, is a recurring item in the Final Fantasy series. It generally heals all status effects for one character with the exception of Knocked Out and Doom, and in some cases, Curse.

Cures ailments except stone and KO.

The Remedy is only found in the 20th Anniversary and iOS releases. It cures all status effects except for Stone and KO. It can be bought at Onrac for 1,500 gil. It is also commonly found in the bonus dungeons.

Cures all status effects except KO.

Remedy is an item only created with the Chemist's Mix command by mixing a Phoenix Down with a Turtle Shell. It cures all status ailments on the mixer.

Cures all status ailments except zombie and KO.

Should players wager Remedy in the Dragon's Neck Coliseum to fight against Typhon, they can win an Elixir.

The Remedy item cures all negative status effects and are very common. It can be bought from Shinra Building Shop Shop for 200 gil and are dropped or stolen from many different enemies and are found in chests.

Remedy is an item that heals all status abnormalities from a party member. It costs 600 gil in shops. It can't be used in hard mode as item use is disabled. It is found randomly in destroyable boxes later into the game; Sector 4 - Plate (Sector H, lower section, cross a catwalk to 3x Grashtrike); Collapsed Sector 7 Plate during "Flight of the Valkyrie"; and Shinra Building during "Operation: Save Aerith" (room with green tanks).

In "Episode INTERmission", Sonon has a weapon passive called Auto-Remedy in his File:Djinn Staff from FFVII Remake icon.png Djinn Staff that automatically has him heal Yuffie with a remedy in battle.

Remedies cure most abnormal statuses from a party member. There is also a stronger incarnation, the Remedy+, which also cures Slow, Stop, Doom, and Vit 0. This is not purchasable and can only be obtained through Alexander's Med Lv Up ability by refining 10 Remedies into 1 Remedy+, or from Chocobo World.

Remedy is also one of the items to synthesize the Garnet in Hades's Synthesis Shop. Multiple Remedies can be used at once with Quina's Angel's Snack ability.

Cures all status abnormalities except KO.

The Remedy item is also available freely to the Alchemist using their Stash ability. Remedy is also an outcome through the Mix ability.

Remedy cures almost all status ailments with the exception of Curse or Amnesia. A unit can only use Remedies on him or her self, meaning that it cannot be used be used to cure status effects that prohibit actions entirely such as Petrification or Sleep. If a player suffers paralysis from a Paralyze status effect while using a Remedy, it will be lost like any other item.

Remedy can be commonly bought after the party defeats Judge Bergan, although it can be found in coffers before that. It can also be bought earlier on by a visit to a merchant in the Mosphoran Highwaste, accessible after receiving the Dawn Shard. It costs 400 gil and restores Poison, Slow, Blind, and Silence should no Remedy Lores be mastered.

A total of three Remedy Lores can be accessed via the License Board, and it restores nearly all negative status ailments once they are all learned, including Stop, Slow, Doom and Disease. The exceptions are KO, Stone, X-Zone, Reverse, and HP Critical.

Remedy is an enemy skill learned by Bwagi at level 12 and enemy Archers at level 24. It restores lowered stats.

Remedy removes the most recent ailment inflicted from a party member. They are obtained from Goblins, Uridimmus, and Mandrakes as drops or can be bought from Chocolina's shop.

Remedy is also an enemy ability used by the Ghoul. However, the animation shown is actually the one for Cure, and the ability has no effect.

Remedy removes two status ailments, casts Veil to prevent debuffs and debilitations, and restores 33% of Lightning's HP. They can be bought from General Stores for 580 gil each.

An upgraded version called Mega Remedy functions the same while removing all status ailments. It can be bought for 980 gil from Day 6 on.

An expensive beverage that takes on curative properties by way of Noctis's powers. Cures poison, petrification, confusion and toad.

Remedies cure status ailments from party members. They are found in various outposts and Gladiolus can pick them up as part of his Survival skill at Level 2–6. It is bought from late game shops.

Use a remedy to cure various status effects.

Remedy cures the statuses Toad, Petrify, Blind, Oil, Poison, Sleep, Silence, and Confuse. It costs 350 gil and can only be used through the Chemist's Item command, after learning it for 700 JP. It can be found with the Treasure Hunter ability at Dugeura Pass, Eagrose Castle, Fort Besselat, Free City of Bervenia, Grogh Heights, Limberry Castle Gate, Keep and Undercroft, inside the Lionel Castle, Mining Town of Gollund, Monastery Vaults and Mount Germinas.

Cureall is a small black item that cures all status ailments. It can also be fed to monsters in the Monster Bank to raise their stats.

Curealls are bought for 350 gil at Baguba Port and are not affected by price deflation via liberating territories. They can be sold for 175 gil.

A tincture that cures what ails you.

Remedy cures all debuffs, but may also by Mirrored by a Ranger to inflict a multitude of debuffs on an opponent. This tactic is particularly effective when paired with a Trickster's Traumatize ability.

Remedies cure the target of all status ailments.

This section about an item in Final Fantasy Type-0 is empty or needs to be expanded. You can help the Final Fantasy Wiki by expanding it.

Remedy is not a normal item, but a crafting item found in Conall Curach. It can be sold for 250 gil.

Remedies can be bought for 400 G Urbeth, Spelvia, the Kingdom of Horne, and in both Guera and Arbor after the darkness has fallen. It can also be found in Spelvia and Liberte. In addition to curing all statuses, the Remedy also restores 100 HP.

This section about an item in Chocobo's Dungeon 2 is empty or needs to be expanded. You can help the Final Fantasy Wiki by expanding it.

This section about an item in Final Fantasy Fables: Chocobo's Dungeon is empty or needs to be expanded. You can help the Final Fantasy Wiki by expanding it.

Panacea (also called Heal) is a consumable item which cures status ailments of a party member.

A powdered medicinal compound that contains small doses of medicine for each of the status ailments.

Remedies cure the target of poison, blind, silence, sleep, paralyze, dread, berserk, confuse, and charm. It can be bought from Florem, Grandship, Hartschild, Starkfort, Eternia, Adventurer (Norende Village Trader Shop Lv. 8) for 500 pg. It can be found in the Temple of Wind, Vestment Cave, Miasma Woods, Temple of Water, Florem Gardens, Witherwood, Mount Fragmentum, and Twilight Ruins and as a reward for tutorial quests.

When used in compounding: 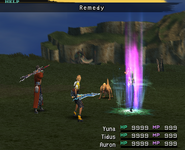 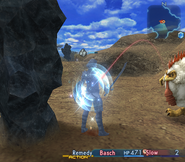