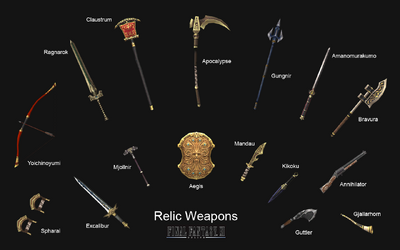 Relic Weapons (古の武器, Inishie no Buki?) are a class of high-rank weapons found in both Final Fantasy XI and Final Fantasy XIV. They are considered to be ideal for their type and level.

Relic Weapons are sixteen weapons in Final Fantasy XI obtainable through a series of weapon upgrades. They are lauded as legendary weapons that were once used by war heroes during the Great Crystal War twenty years prior to present day Vana'diel.

Relic Weapons are the first of three legendary sets of weapons to be introduced in Final Fantasy XI. All Relic Weapons were added to the game in the Rise of the Zilart expansion pack, with the sole exception of Aegis, which was added in Chains of Promathia.

Strictly speaking, not all Relic Weapons are actual weapons, as the set includes a wind instrument and a shield as well. The rest of the weapons each belong to a different weapon type and come with their own unique weapon skills. Each weapon would produce a different special effect for its wielder, known as an aftermath, when the unique weapon skill was used for the weapon. Also, in addition to their stated effects, all Relic weapons come with the hidden effect of occasionally dealing triple damage.

To obtain the weapons, players must venture into Dynamis and obtain the base relic weapons, and subsequently upgrade the weapons through various stages by paying ancient currency, as well as other special items obtained from Dynamis, to the Goblin Switchstix.

The initial level of a Relic Weapon is 75, but various Magian Trials may be undertaken to improve the weapons, capable of being upgraded like the Empyrean Weapons to a final, elevated Level 99 Afterglow version. The afterglow of all Relic Weapons is a radiant gold.

Barret: There's no gettin' off this train we on 'till we reach the end of the line.
This article is about an ongoing project that's continually being updated. As such, some of the information might be inaccurate or likely to change. Please look over our policy for updating articles covering upcoming games before editing this page.

Relic weapons are the best weapons in the game. They are obtained through the quest "A Relic Reborn", the final portion of which was added in patch 1.22c.

The requirements for accepting A Relic Reborn are daunting, as they include spending at least 25,000 Grand Company seals, obtaining Primal Seals from Hamlet Defenses, obtaining a class-exclusive weapon melded with two Materia, slaying specific Notorious Monsters, completing instanced raids for rare drops, and finally defeating the harder version of Ifrit. As double-melding is far from guaranteed, adventurers can expect to deplete their gil on the expenses for Materia and class-exclusive weapons.

It should be noted that while the class-exclusive weapons can only be worn by Classes (Pugilist, Marauder, Thaumaturge, etc), the relics are apparently only usable by Jobs (Monk, Warrior, Black Mage). As a character is required to have a weapon equipped at all times, relic weapons automatically activate the appropriate Job when equipped.

Additionally, the Claustrum appears in XIV as the staff held by NPC Kan-E-Senna.

The Claustrum appears as Shantotto's ultimate weapon, equippable at level 100. It provides 40 BRV; 67 ATK; a 40% boost to initial Bravery and a strong version of the Gambler's Spirit ability. It is tradable at the shop for 31920 gil, a Laevateinn, 5 Boiling Blood, and 5 Quickstrike Orbs.

The Claustrum returns as Shantotto's ultimate weapon, equippable at level 100. Its power has been adjusted and it now provides 39 BRV; 67 ATK; a 40% boost to initial Bravery and the Cat Nip ability. It is tradable at the shop for 182800 gil, a Laevateinn, a Boiling Blood, and 5 Lady's Hopes.

Another Relic Weapon, the Spharai, appear as an exclusive weapon for Prishe and is equipable at Level 90+. It is needed to create her final weapon, the Glanzfaust. It provides 69 BRV; 63 ATK; a 522 HP penalty and boosts the Assist gauge duration by 20%. It is tradable for 158000 gil, a pair of Koenigs Knuckles, an Electrum and 5 Horror's Dreams.

Retrieved from "https://finalfantasy.fandom.com/wiki/Relic_Weapon_(equipment)?oldid=1700627"
Community content is available under CC-BY-SA unless otherwise noted.