Final Fantasy Wiki
Register
Don't have an account?
Sign In
Advertisement
in: Characters in Final Fantasy: The 4 Heroes of Light, Guest characters, Dancers

Guest character
Rekoteh is a temporary playable character from Final Fantasy: The 4 Heroes of Light. She is a Dragonier who lives with her family in Invidia. Rekoteh is seeking a way to reach her brother, Rolan, in Spelvia.

Rekoteh is a young girl with short silver hair and brown eyes. She wears a long heavy blue coat with white fur trim and black gloves. She wears black tights and pink boots. She wears a red and yellow scarf with a white pompom on each end and a large red bow with yellow designs on her head.

Her animal form is a small light blue cat with a large red and yellow bow on her head.

Brandt and Jusqua first meet Rekoteh in Invidia while looking for a way to reach Spelvia. Rekoteh says that the only way there is to fly. As she wants to go to Spelvia to see her brother Rolan, she joins them in order to find a way to hatch the Dragon egg in the middle of town, which has lain dormant without the Mother Dragon. After failing to awaken the hatchling with Firaga or a strike by a Mythril Hammer, Rekoteh recalls singing a song to awaken dragons at a festival and suggests they look for the Dragon Harp from the Invidia Underground.

The harp successfully wakes the dragon, and the group flies to Spelvia and reunite with Yunita and Aire. After the heroes defeat Rolan, Rekoteh arrives and holds onto her brother as his inner darkness is unleashed on the world.

After being sent fifteen years into the past, the party goes Invidia and meets up with a younger Rekoteh. She is depressed over her brother's absence and has been banished from the house by her father, the Chief of Invidia, until she finds the Dragon's Mark, also located in the Underground (which, paradoxically, can only be entered from inside the house). The party decides to help by fetching the crest themselves and bringing it to the Chief. He allows her back in, but when he tells Rekoteh that they need to wait for Rolan to build his empire she becomes angry at him and runs out again. There, she explains to the party that the ice queen, Mammon, caused the endless winter when she invaded the Sun Temple. Other townspeople remark that Rekoteh is the only one who hasn't become cold and embittered.

After the party defeats Mammon and restores Invidia, the Chief apologizes to Rekoteh and says that they should go visit Rolan in Spelvia, to her delight. Rekoteh and Rolan are seen at the end of the game and thank the party for saving the world.

Rekoteh is equipped with a Shark Lance and Rekoteh's Clothes. During battle she uses the Dancer crown and has access to the Dance ability. Rekoteh also has the spells Cure Tome, Cura Tome, and Raise Tome in her inventory.

Rekoteh's initial stats when she joins the party.

Rekoteh and the others hatching the dragon by Akihiko Yoshida. 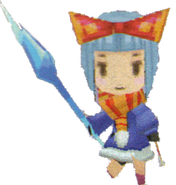