Regen (リジェネ, Rijene?) is a recurring status effect that constantly restores HP at a set interval. Characters afflicted by Regen gradually recover HP over time, however, it has the exact opposite effect if the target is undead, where it gradually reduces one's HP, as if poisoned. In some cases, Regen is ineffective against an undead. Regen is the opposite of Sap. The most common way to apply the Regen status is through the spell of the same name, Regen.

The Regen status can only be gotten through Fusoya's Regen command, which disables him while the Regen status is in effect on the party for a period of time. The party will periodically recover 10 HP at set intervals. Once the status is lifted, Fusoya will once again be able to input commands. The Regen status cannot be removed, but will be lifted when a certain amount of time has passed.

Regen is achieved through the spell of the same name, the song Mighty March, the accessory Protect Ring, or through the Mix ability Water of Life (through combining a Potion and Hi-Potion). There is no visible indication of the status in effect, except for the occasional healing. Regen is one of the few spells that may heal undead, and can bypass immunity to the status with the help of the Dragon Armor mix.

The formula for Regen is as follows:

The Mighty March from the Bard's Sing skillset applies a Regen effect on the party for as long as the Bard is singing.

Regen is achieved through the spell of the same name, by summoning Kirin, or by a character equipping the Angel Ring or Miracle Shoes relics.

The amount of HP recovered through Regen is as follows:

HP gained through Regen occurs approximately every 8.5 seconds. If a character has immunity to Regen, they also gain immunity to Sap, and vice versa, and the other status can never be applied during battle.

A unit under Regen will have their HP continually increase while they glow in orange until the status wears off.

The player can only cast Regen through the Regen ability.

The effect of Regen is not attached to any element. The Regen status is unrelated to the Restorative element and will still heal Undead enemies (those who absorb Restorative, thus reversing its effects).

This section about a status effect in Crisis Core -Final Fantasy VII- is empty or needs to be expanded. You can help the Final Fantasy Wiki by expanding it.

This section about a status effect in Final Fantasy VII Remake is empty or needs to be expanded. You can help the Final Fantasy Wiki by expanding it.

Regen can only be achieved through the spell of the same name or through Quistis's Limit Break, Mighty Guard. Regen will restore 5% Max HP every 80 x BattleSpeed ticks (a tick is a 1/60th of a second), resulting in the status restoring 80% max HP (16 times per cast). The status lasts for around 21.3 seconds.

The White Magic spell Regen, the Flair ability Aura, the Dragon ability Reis's Wind, and the support ability Auto-Regen are the ways for the party to gain Regen status. Regen is more effective the higher the unit's Spirit, lasting longer and ticking more frequently, and keeps on restoring health even during battle animations, allowing the party to easily regain their health by summoning an eidolon. Regen normally restores 1/16th of the target's Max HP per tick. Regen is removed with Dispel, unless it is Auto-Regen. The effect is reversed on the undead.

Regen is a status that restores a small amount of HP at the start of a turn from any unit in battle, and lasts until the unit takes its tenth turn after receiving the status. The amount of HP restored is between 100 and a tenth of the unit's maximum HP, and it can potentially break the upper damage limit of 99,999 when bestowed on enemies who have over a million HP.

Regen restores the target's HP over time and is gained by the White Magic spell, Regen, or the Blue Magic spell, Regeneration. A trait called Auto-Regen can be learned by White Mages, Blue Mages, and the avatar Carbuncle that gives the same effect. Also, Carbuncle's Favor grants HP regeneration to party members near him.

Regen can also be obtained by drinking milk, as a bonus from Sanction or Sigil, or as field support from a Field Manual.

The natural recuperative faculties of the character's body are heightened, restoring HP gradually over time. The effect is temporary.

Regen is achieved through casting the spell of the same name, equipping the Ring of Renewal accessory or Renewing Morion light armor hat, or a character being hit by the Healing Rod. In the Zodiac versions, Ribbon also grants Regen as well as Libra.

During Regen, the character gains HP over time, canceling out Sap. The amount increased is a random amount from 1 to the unit's level every 1.5 seconds. This makes it nigh useless in a New Game Minus playthrough. Regen is unaffected by Reverse.

The formula for the duration is:

The only player spell that grants Regen is Ashe's Regenga. Basch's ability Inner Peace also gives the user the Regen status. Penelo's Protective Armlet accessory bestows Regen upon every member of her team.

While Regen as a status does not exist, the Sentinel role's Mediguard ability will continuously restore HP to the character using it as long as it is active. Mediguard is learned by Snow, Vanille and Fang.

Regen is a buff, having three hearts in its icon. It is used by certain opponents, and can also be cast on Serah and Noel via certain Monster abilities, such as the "Refreshing Rain" Feral Link. It cannot be dispelled, as indicated by its hexagonal border, but inflicting the enemy with Poison will counteract its effect.

Regen restores 0.4% max HP every second. It cannot be gained through any direct ability, but can be triggered indirectly through some auto-abilities or the use of certain items. Mediguard also returns as an active ability, providing a Regen-like effect while guarding.

Regen is granted as a status effect by using the White Mage ability Regen.

At the end of every AT, a character with Regen will gain back (1/8) of their maximum HP. Regen lasts for 36 ticks.

Auto-Regen is available to Hunters and Snipers as reaction abilities. A Defender's Aura skill bestows Regen along with Auto-Life. The Summoner's summon, Kirin, bestows Regen in an area.

Regen is a buff that gives the targeted unit 1/10th of its max HP (rounded down). In addition to being a reaction ability for Hunters and Snipers, it is also a clan benefit that can be chosen before each battle upon earning the clan title "Journeymen", and there are also the stronger versions of this Clan Privilege called Regenra and Regenga. It can be learned as an action ability by many characters, but often is not called Regen.

Regeneration is a status effect that causes Ashley's HP to recover at a faster rate. It is cast by using Grimoire Vie, and later on with the Shaman spell Surging Balm. However, this status is removed when Ashley is hit by another spell, or when he moves to another room. It may also be removed with Dispel.

Regen is a bonus effect added to certain armors and weapons. It recovers either HP or SP.

Though not referred to as "Regen", some "miracle" accessories have the bonus effect of recovering one of Layle's life points every ten seconds.

The Regen status recovers some HP per character's turn. It is gained from the Regen spell, the Wayfarer's Recovery command, the Musician's Serenade command or the Lux spell.

Regen is a status effect shared by all characters when entering EX Mode. It can also raise Bravery over time during EX Mode if the "Brave Regen" ability is equipped.

Regen is also a Story Mode skill that recovers 5% of the character's total HP whenever his Home Area changes. It continues over all the levels of the story.

This section about a status effect in Dissidia Final Fantasy Opera Omnia is empty or needs to be expanded. You can help the Final Fantasy Wiki by expanding it.

Regen restores some of the affected's HP once per turn. 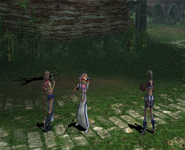