Ring enchanted with the spell 'Reflect'

The Reflect Ring (リフレクトリング, Rifurekuto Ringu?), also known as Wall Ring, is a recurring accessory in the Final Fantasy series. It casts Reflect on the wearer, making it useful for fighting enemies and bosses that use magical attacks. An ability known as Auto-Reflect also casts Reflect on the user similar to the Reflect Ring. The accessory that grants Auto-Reflect is not always called Reflect Ring; in Final Fantasy XII it is the Ruby Ring.

Ring with the same effect as Reflect.

The Reflect Ring (originally called Wall Ring) grants Auto-Reflect. It can be bought at Narshe, Albrook, Thamasa, and South Figaro for 6,000 gil and found in Narshe in the World of Ruin and Imperial Observation Post, and can be won from the Coliseum by betting an Elixir. It can be equipped by anyone.

The Reflect Ring grants Auto-Reflect. It can be equipped by anyone. It can be stolen from Ultimate Weapon when battling it on the ground, or dropped from Jenova∙DEATH.

The Reflect Ring teaches the abilities Reflect, Distract, and Auto-Reflect. It grants +1 Strength, Magic, and Magic Defense, but also increases the amount of Fire, Ice, and Lightning-elemental damage the user takes. It can be synthesized for 7000 gil, an Anklet, and a Madain's Ring at Black Mage Village, Alexandria, Treno, Lindblum, and Daguerreo, and bought at the Treno Auction House.

A ring engraved with arcane symbols that can reflect magick cast upon the wearer.

The Reflect Ring can be bought for 10,000 gil at outfitters. It is also found with the Treasure Hunter ability in Monastery Vaults. It is limited in usefulness, as it also prevents the wearer from being revived by Raise spells, because spells are reflected even while the unit is knocked out.

Reflect Bangle grants Auto-Reflect to the wearer. On the continent where Harmonia is there is a small patch of snow on the northeastern side with a hidden area where the player can find a chest containing both Talos (enemy) and a Reflect Bangle.

This ring from a faraway world has a large, blue gem placed squarely in the middle of it. It protects its wearer by reflecting magic attacks. In can be found in the mining town of Narshe or the Imperial Observation Post located near the cave that serves as the entrance to the Esper World.

Reflect Ring (FFVI) is an accessory that provides 30 MAG and Auto-Reflect. It is obtained during the Final Fantasy VI event, Narshe.

A ring carved with a strange relief showing four goddesses screaming in lament. It is said to have a special spell of magic repulsion trapped inside.

In Bravely Default, Reflect Ring is an accessory that grants Reflect at the start of battle. It can be bought in Norende reconstruction for 10000 pg from the Adventurer, or dropped Chaugmar.

In Bravely Second: End Layer, Reflect Ring is an accessory that grants Reflect at the start of battle. It can be found in Via Celestio. 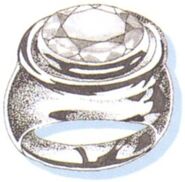