Reflect (リフレク, Rifureku?), sometimes translated as Wall (not to be confused with the recurring Wall spell), is a spell that bestows the Reflect status. It appears in various games in the Final Fantasy series.

Magic directed at a target with Reflect will bounce back to strike its caster. Most spells, even recovery spells, can be reflected. However, some spells can pierce the effect, and reflected spells tend to be weaker than when normally cast. The summon Carbuncle can cast Reflect on the party when summoned.

Reflect is a level 7 White Magic spell bought for 20,000 gil at Doga's Village or the Invincible. It has a 75% accuracy of granting Reflect, and can be used through the Shining Curtain item. The enemies Unei's Clone, Unei, and Guardian can use this spell. In the NES version, the spell is bugged, and will only reflect enemy magic, not spells cast on allies with the status.

Reflect (originally called Wall) is a White Magic spell learned by Rosa (level 36 - 2D; level 40 - 3D); Porom (level 31) and Fusoya (default). It has a casting time of 0 and costs 30 MP to cast in all versions. Haste causes Reflect to wear off faster while Slow prolongs it.

Reflect can be cast by Zeromus EG, Sandy (2D and 3D, Baigan (2D and 3D), Deathmask (Deathmask and 3D), CPU (2D and 3D), Dark Bahamut (2D and 3D), Proto Deathmask, Flan Master, Platinum Toad, and Brachioraidos. It can be nullified by Dispel in the 3D versions.

Reflect is a White Magic spell learned by Rosa (level 36) and Porom (level 44). It grants Reflect to a single target at the cost of 30 MP.

Reflect is learned by Rosa (level 40), Ceodore (level 45, Porom (level 44), and Fusoya (default). It costs 30 MP to cast. The Creator's second form can cast Reflect, except with the message "Auto-reflect on".

Reflect is a level 5 White Magic spell that costs 15 MP to cast. It can be bought for 6,000 gil at Moore. Reflect can be cast by Calofisteri and Omniscient. It can also be used by catching and releasing a Sorcerer, Stone Mask, or Neon. Reflect is one of the spells that can be cast from the Wonder Wand for free.

Reflect is an effect spell learned from Carbuncle at a x5 rate. It costs 22 MP to cast and is vulnerable to Runic. Reflect can be cast by Curlax, Gold Dragon, Laragorn, Level 30 Magic, Magic, Moebius, Clymenus, Kaiser Dragon, Zurvan, Soul Saver, Flame Eater, and Shiva.

Reflect is the level 3 spell of the Barrier Magic Materia. Reflect costs 30 MP to cast. The bosses Jenova∙LIFE and Gorkii both make use of this spell.

If both the enemy and player parties are in Reflect status, reflectable spells will bounce back and forth between targets. Reflect expires after reflecting four spells. The Reflect Ring gives automatic Reflect status that only reflects each spell once, rather than constantly bouncing it.

Reflect can be drawn and junctioned to player characters' stats. It is the third best spell to junction to the Spirit stat, and can be junctioned to provide resistance to most status effects. Ruby Dragon casts Reflect onto itself if the party has it. Casting Reflect in battle increases compatibility with Carbuncle by 1, and with Cerberus by 0.2, but lowers compatibility with Diablos and Eden by 0.2 as well.

Reflect is a White Magic spell learned by Dagger and Eiko. It costs 6 MP to cast and 20 AP to learn through Mythril Racket, Stardust Rod, Reflect Ring, and Ruby. The spell itself can be reflected and works with Return Magic.

Alternatives to casting Reflect are Auto-Reflect and Carbuncle's Ruby Light.

Reflect is a White Magic spell found in Yuna's section of the Sphere Grid. It costs 14 MP to cast. Reflect can be cast by Dark Element, Guado Guardian during the Wendigo fight, Jumbo Flan, Sanctuary Keeper, and Seymour Flux.

Reflect is an ability in the White Mage's skillset. It requires 30 AP to master and 14 MP to cast. The Shining Mirror Garment Grid allows any dressphere the ability to cast Reflect, and can also grants Auto-Reflect.

In the original version, Reflect is a Time Magick spell, unlocked from the Time Magick 2 license for 25 LP. Reflect can be bought for 800 gil in Bhujerba (after Ba'Gamnan in Lhusu Mines), Dreadnought Leviathan, Rabanastre (after Leviathan, and Dalmasca Westersand (after Leviathan), and from Dyce (Sandseas).

In the Zodiac versions, Reflect can be cast by Red Battlemage and Time Battlemage, and can only be found in a treasure in the Ogir-Yensa Sandsea Primary Tank Complex area.

An upgrade, called Reflectga, can be also be learned, which casts Reflect on all in-range allies.

Reflect is a Time Magick ability that will reflect all spells back to their caster, but the more powerful spells are not affected. It costs 12 MP and has a speed of 50, but costs 300 JP to learn. In the help message of carious spells, the ☇ symbol means that a magick can be reflected.

There is a dummied reaction ability found in the game data. This incomplete ability has no effect. Its name and description suggest it would probably have granted the Reflect status to the unit if it was hit by magick.

Reflect is a Time Magic that will reflect all spells back to their caster. It is learned from the Thunder Rod and requires 300 MP to master. It costs 8 MP to cast and is stealable through the ability Steal: Ability.

The Mirror Mail grants a passive Auto-Reflect to the wearer.

Reflect is a Time Magic ability that will reflect all spells back to their caster, however, there now exists the support ability Pierce that allows Magick cast by a unit with it ignore Reflect.

PsychShield is an enemy only ability, used by Pazuzu and Zuh. It reflects magic attacks back upon the caster. However, if Pazuzu and Zuh take enough damage from physical attacks, PsychShield will fall and spells can be safely used again.

Mirror is an ability that has 15 uses that also increases a Robot's HP by 9. It reflects magic. This ability can be used by Anubis, C-Fisher, Nike, Ninja, and Rakshasa.

Wall is a White Magic spell that can protect allies from enemy's magic spells. It costs 32 MP to use, and it can be bought for 18000 GP in Knaya (Pureland).

Mirror is a command learned from the Black Mage job class that gives the Reflect status to all party members and it costs 3 AP to cast.

Reflect is a level 4 White Magic. It forms a barrier around one target that reflects white magic, black magic, and time magic. It requires 16 MP to use. It can be bought in Hartschild for 1600 pg.

Give allies within range of you the power to reflect magic.

Reflect is an active ability that causes a single target to reflect magic back at casters for 4 AP. It can be used by Astraea, Buer, Cenchos, Diva Serafie, Entom Guard, Kraken, Left Claw, Magic Jar, and Ultros★.

Dispel is a level 6 White Mage spell that costs 3 SP to cast. It removes curses from equipped items.

Reflect is a Magic Stone that can be collected and then used either manually, or automatically when another character uses a Magic Stone against the character bearing it. It deflects the attack back at the user.

Reflect is used through the Reflect card.

Reflect appears in Kingdom Hearts II as a defensive spell. It creates a wall of light around Sora that defends against attacks for a short time, then explodes to deal damage to nearby enemies equal to the damage the barrier absorbed. Reflect can be upgraded to Reflera and Reflega, which have larger areas of effect. Reflect also appears in Birth by Sleep, but is renamed Barrier. It is a defense command exclusive to Aqua, but it cannot stop all attacks nor can it counterattack. 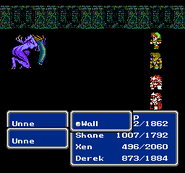 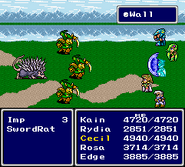 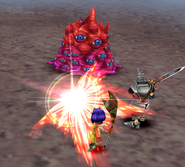 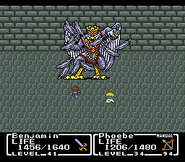 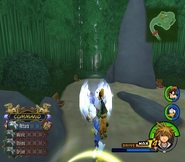 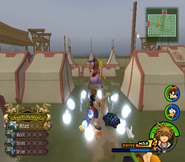 This gallery is incomplete and requires Final Fantasy IV: The After Years (Wii) added. You can help the Final Fantasy Wiki by uploading images.
White Magic
Time Magic
Deutsch Русский
Community content is available under CC-BY-SA unless otherwise noted.
Advertisement