Refia is a playable character from the 3D remake of Final Fantasy III. She is a Warrior of Light. 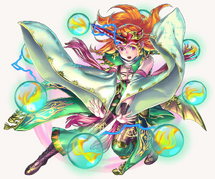 Refia appears as a earth-elemental summon. She appears as part of the "Summoner Refia" event.

Refia's special attack is Bahamur, which raises the attack and magic power of all allies for three turns and causes the enemy party to have no damage negated. Summoning Refia costs 3 point from the Consumption Gauge.

Refia allows the wielder to use the following abilities:

This section in Final Fantasy Legends: Toki no Suishō is empty or needs to be expanded. You can help the Final Fantasy Wiki by expanding it.

Her initial Soul Break is Martial Arts which at the expense of one Soul Gauge segment raises user's Attack and Accuracy.

Retrieved from "https://finalfantasy.fandom.com/wiki/Refia?oldid=2418693"
Community content is available under CC-BY-SA unless otherwise noted.