As a member of the Final Fantasy III remake cast alongside the other three Warriors of Light, Refia often joins them in other series works. The following is a list of Refia's appearances in and out of the series as a whole.

Two versions of Refia appeared as signets in the original free-to-play version of Final Fantasy Dimensions II. A unique version of Refia known as Summoner Refia appeared as the highlight signet of the "Summoner Refia" event banner. In addition, the "Summoner RE" signet depicted Refia in her Summoner attire from the 3D remakes of the game. Both versions were earth-elemental signets and could be obtained as a signet through the game's summon drawing shop.

Both Summoner Refia and Summoner RE's special attacks were Bahamur, which raised the attack and magic power of all allies for three turns and removed the enemy party's invincibility status. Summoning Refia required 3 bars from the Summon Gauge.

The following are the abilities that each version of Refia allowed the wielder to use:

Similar to other series cameo characters, the Summoner Refia and Summoner RE summons were removed from the premium release of Final Fantasy Dimensions II.

Refia appears as a summonable vision and optional playable character. She has two variants: the 4-6★ "Refia" (レフィア, Refia?), based on her appearance in the 3D remake's FMV opening, and the 5-7★ "Onion Knight Refia" (たまねぎ剣士レフィア, Tamanegi Kenshi Refia?). Both are Rare Summons; however, their role, job, stats and skillsets differ, as do their Trust Master rewards. 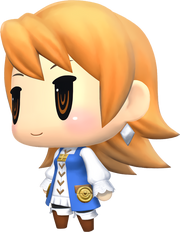 Refia appears as a non-player character who accompanies players through the Icicle Ridge. She is adept in white magic, which she uses to heal the party after battles.

Daughter of Saronia
Refia was chased out of house and home by her only living relative, her uncle Takka. Given no reason for her exile, she did her best to keep her spirits up and forget her troubles. However, when she saw the woes the people of Saronia faced as a Federation state, she could remain silent no longer. Ignoring the danger, she left to give her uncle a piece of her mind. But it was already too late...

Sherlotta's Friend and Ward
Sherlotta discovered Refia one day collapsed and freezing in the snow. She took in and cared for the exiled girl, and they've been fast friends ever since.

It may surprise you that the strong-willed, independent Refia could get along so well with the tough, no-nonsense Sherlotta. But Refia is a good-natured and honest girl. So while she might not show it, Refia will never forget that she owes Sherlotta her life.

Why a White Mage?
The original Refia had the ability to freely switch between multiple skillsets known as "jobs." However, she was a white mage when her soul was noticed and brought into Grymoire, and so it was a white mage she became.

Life as a healer and her relationship with Sherlotta have shaped Refia. If she had been another job when her soul was brought over, she might have developed into an entirely different person.

First World of Origin:
FINAL FANTASY III: In the remake

The following is a list of quotes uttered by Refia when talking to her.

Thank you for everything.

How goes the journey?