Refia is a playable character from the 3D remake of Final Fantasy III. She is a Warrior of Light, and is first encountered at Cid's airship.

Refia has red hair and red eyes. Her Freelancer outfit is a white long-sleeved blouse with a blue vest, black leggings, and thigh-high boots. Refia's theme color is blue, shown in her job armor. Although most of her outfits are the same as the other characters', a few, like Summoner, are feminized. Her cross-shaped brooch distinguishes her job outfits among the party. Refia sports various hairstyles, ranging from braids to ponytails to pigtails. In the opening FMV, she is depicted as a White Mage.

Doga and Unei describe Refia as the light of affection. As the sole female of the party, Refia is more of a motherly character than a love interest, and scolds her companions for their unruly behavior, like Desch's crushes on other women despite being faithful to Salina, or Luneth's casual behavior when meeting Sara Altney and Aria Benett. Refia has a rebellious streak, like her habit of escaping her father's blacksmith training, but deep down she cares for him and is at first torn between joining her allies, or staying in Kazus.

Though she cares for her adopted father and is grateful for the support he's given her, Refia gets frustrated with his insistence that she become a blacksmith as well, since she'd rather decide her own direction in life. She is passionate and not afraid to voice her thoughts and emotions, usually quite loudly. She evokes a sense of sympathy and empathy, and despite her lecturing, she does it because she cares for the other Warriors of Light.

Refia hates toads, and much to her dislike the party being required to transform into them to reach certain locations, like the Tower of Owen.

Refia was raised by the Kazus village blacksmith, Takka. She tired of her strict blacksmith training and ran away from home. When she tries to escape on Cid's ship, Luneth and Arc find her and ask for her help in making a Mythril Ring to lift the Djinn's curse. She lacks the skill and advises they go to Sasune, as her father made one for the king there. She begs to accompany them, wanting to help her hometown.

Although she is chosen as a Warrior of the Light after the battle with the Djinn, Takka orders her to stay in Kazus when they return there. She leaves the party briefly, feeling guilty for having run away earlier and upsetting him, but soon stows away on the airship again and remains in the party.

Cid tells Refia and the others that they hail from the surface world. When they were mere toddlers, Refia, Luneth, Arc and Ingus and their biological parents boarded Cid's airship, which flew into a strange and violent cloud, crashing onto the Floating Continent. The parents perished but the children survived. It is unknown what happened to Refia after this; it is possible Takka found her near Kazus.

When the party travels to Canaan, Refia befriends Salina and is outraged her boyfriend Desch ran off to Dragon's Peak. When the party climbs the mountain to find the Mini spell, they find Desch in Bahamut's nest. After they flee the dragon, Desch joins the party temporarily. Refia and Desch have an odd friendship; while they like talking and she tries to help him remember his past, she tells him off for hurting Salina's feelings and talking about meeting other girls. She is deeply upset when he jumps into the furnace in the Tower of Owen.

Refia's battle prowess is determined by the job she is equipping. She starts a Freelancer, but after making some progress, more jobs become available, and the player is allowed to freely change between jobs and accumulate progress in each. Whenever a character gains a level, their maximum HP increases by a random amount, thus, changing to high-vitality jobs—like Monk, Knight, Viking and Black Belt—before leveling up makes it easier to max out HP.

At the end of a victorious battle, Refia holds her hands in front of her. When she gains a level or job level she will spin. 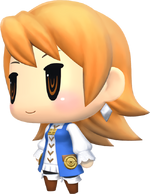 Refia has appeared in the following Final Fantasy media:

Refia is the only Light Warrior not based on the original player characters or an NPC from the NES version.

Unused text for the Sealed Cave and Castle Sasune have Refia state that the Mythril Ring was originally made for her. However, she claims to be kidding afterwards, though her reaction when Sara throws the ring suggests otherwise.[1] Unused text for Duster shows a sub-plot in which a bard wishes to use Refia as a muse, much to her discomfort. At the end of the sub-plot, the party would have gained the Bard job.[2]

[view · edit · purge]Refia is a Turkish name that means "lofty" or "above".

Prerelease screenshots and have her name romanized as "Leohia" and "Lephia". In unused text for the Saronia Catacombs, Refia's name is given as "ルフィア" instead of the final game's "レフィア".[3]