The illusions of the past. You think to have cast them off, only to find them years later, unwearying, unrelenting. The past can bind a man as surely as irons.

Reddas, real name Foris Zecht, is a guest character in Final Fantasy XII. A pirate of both the land and sky, he is the ruler of Balfonheim, cursed with memories of his terrible actions.

Do not forget Nabudis. That is my only counsel for you.

Reddas is a mature man of 33, with a strong, stocky build. He has a white beard, mutton chops, and a bald head. He wears a camel shirt with exposed shoulders, large bell-sleeves and a large collar. Across his shirt he wears a dark leather strapped holster, in which he keeps his weapons, the Chirijiraden and the Ninja Knife. He wears pink cropped trousers and a silver pendant around his neck. On his feet he wears open-shinned strap boots.

Reddas is a man haunted by his past, one that he cannot easily let go. Despite attempts to continue on with his life, Reddas's remorse over his past actions never truly leaves him, despite his change of identity. He proves to be both noble and brave, and ultimately selfless in his sacrifice to save Dalmasca.

A Judge Magister there was... Two years past, he took in his hand the Midlight Shard, stolen from Nabradia, and used it not knowing what he did...and Nabudis was blown away. Cid ordered this of him to learn the nethicite's true power. That man swore never to let such terrible power be used again. He forsook his Judicer's plate, and his name.

Foris Zecht was a loyal and trusted Judge Magister for the Archadian Empire. He led the 13th Bureau and accompanied Vayne in his command of the 8th Imperial Fleet before Ghis took it over.[2]

During the war with Nabradia Archadian forces obtained a potent heirloom of Dynast King Raithwall known as the Midlight Shard. Judge Zecht traveled to Nabradia and, following the specific instructions of Dr. Cid, unleashed the shard's full power, actually a piece of deifacted nethicite, upon Nabudis, the Nabradian capital. The effect was catastrophic; within moments the entire population of the city was wiped out, the royal palace destroyed and half the region submerged in a thick layer of Mist.

Though the Archadian armada moved towards the next battle at Nalbina, Zecht wanted no further part in the war. Consumed with guilt, the Judge Magister left his name and rank in the festering Necrohol and fled. Though not a confirmed casualty, he was soon replaced by Judge Gabranth and remained absent from Imperial records until his vengeful encounter with Dr. Cid at Draklor Laboratory two years later. After Nabudis he took the name of Reddas, and found refuge in the major trade-center and pirate den of Balfonheim. Reddas used his natural authority to assume control of the port and within months he had driven out corruption and was made a patron among pirates.

I, Judge Magister, condemn you to oblivion!

At the request of Marquis Ondore of Bhujerba, Reddas infiltrates Draklor Laboratory in Archades. After stealing details on new projects and Archadian troop movements—and by that, defeating many Imperial Troops—he encounters Princess Ashe's party before confronting Dr Cid.

Mistaking the party as Cid's underlings, Basch deflects Reddas's attack with his bare hands, and, realizing his mistake, Reddas apologizes. He tries to cut down Cid, only to be tossed to the side by Venat. After Cid is defeated, Reddas introduces himself to the party, and pledges himself under Ashe's employ.

The party return to Balfonheim Port with Reddas to his Manse in Saccio Lane, where they discuss the current political situation, and the possibility of the Resistance going to war against the Empire. Reddas reveals he has spoken to the Marquis concerning this situation before, and expresses his reservations of challenging Vayne when he is wielding nethicite. With this in mind, the party plans to follow Cid to Giruvegan in hopes of destroying the nethicite.

Wary of Cid's intent, Reddas follows up leads he found in the labs instead of joining the party by sending a fleet of ships to investigate the Ridorana Cataract. He refers the party to his team—Rikken, Elza and Raz—to point them in the direction of the Feywood. Reddas senses Ashe is unsure whether to destroy or use the nethicite, and implores her to remember the devastation at Nabudis.

When the party returns to Balfonheim after visiting Giruvegan, they learn none of Reddas's armada sent to the Cataract have returned. Reddas inquires after Ashe's trip, sensing it went badly, and learns Cid tricked them and was never headed for Giruvegan, but that Ashe had been tasked by the Occuria to obtain new nethicite from the motherlode. After supposing the Sun-Cryst lies in the Cataract as per instructions given by the Occuria, Reddas provides Balthier with a skystone that allows the Strahl fly over Jagd to the Cataract, and joins the party as a guest.

After arriving at the Cataract and climbing the Pharos, the party encounters Gabranth. Reddas confronts him and reveals his true identity and past as the Judge Magister Zecht. Reddas helps the party defeat Gabranth just as Cid arrives to use the power of the deifacted nethicite he holds to call the Sun-Cryst to spill Mist over Ivalice. The party defeats Cid but his plan has already been realized; the Sun-Cryst has powered up the Empire's new battleship, Sky Fortress Bahamut, and is beyond control.

Ashe and Vaan try to destroy the Sun-Cryst but struggle against its power. Seeing this to be his chance to finally defeat his past, Reddas takes the Sword of Kings from Ashe and implores the party to leave him to deal with the volatile nethicite. While the party escapes, Reddas destroys the Sun-Cryst whose destruction results in a massive explosion, obliterating the top of the Pharos and killing Reddas.

Reddas is a guest party member who joins after the party gains the Treaty-Blade. The storyline dungeons he is available for are Ridorana Cataract and Pharos, but during this time the player can also tackle a lot of optional content; however, Reddas will not be of much help against the harder bosses and hunts. He wields the Chirijiraden and Ninja Knife, weapons exclusive to him. He is fast and physically quite strong, but lacks HP. 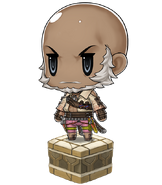 Reddas has many similarities with Balthier, and could be seen as a counterpoint to him. Reddas used to be a Judge, was used by Cid to test deifacted nethicite and unwittingly destroyed Nabradia. Reddas then abandoned Judgehood to become a sky pirate with disdain toward nethicite, changing his name to hide his true identity. Balthier never used nethicite to wreak havoc, but it is implied Cid had his hand in making him a Judge to further his own goals.

Key art for the Steam version.