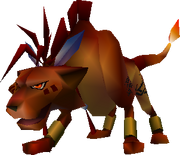 Red XIII is a playable character in Final Fantasy VII who also appears in a small role in Before Crisis -Final Fantasy VII- as a boss, now called "Nanaki". Red XIII is a jack-of-all-trades type character. He does not wield a weapon, but can be equipped with different head adornments in his weapon slot. He is faster than the other party members.

Red XIII has the highest Speed stat. His lowest stat is his MP.

When he joins the party his starting level is decided by the following formula:

Red XIII uses various hairclips, decorative combs, and other "headdresses" to enhance his fighting abilities, but unlike with other characters, his weapon is not rendered on his battle model. His weapons have decent power and many boost his Magic stat.

Seraph Comb is obtained after the Cave of the Gi. With 68 battle power, it is the strongest weapon in the game up until that point, and most other characters do not acquire weapons of equal power until the Temple of the Ancients and after. Red XIII is also the only close-range character to acquire a long-range weapon, the Hairpin.

His ultimate weapon, the Limited Moon, does more damage the fuller his MP gauge is.

Red XIII's lower-level Limit Breaks involve boosting his stats, particularly through Haste, which augments his speed. His later Limit Breaks hit multiple enemies, and his ultimate Limit Break, Cosmo Memory, hits all enemies for 8x damage, allowing it to easily do 9,999 damage even at low levels.

Nanaki is fought as a boss in Before Crisis -Final Fantasy VII-. First in Chapter 18, then in the Training Mode.