Baron Castle
The Red Wings is a military group in Final Fantasy IV. They are the elite air force of Baron and pilot state of the art airships designed by Cid Pollendina. Through the Red Wings, Baron became the most powerful nation in the world, and could easily stand up to other nations who did not have the technology to build airships.

The Red Wings are commanded by the Dark Knight, Cecil Harvey, who leads them in the First Battle of Mysidia to steal the Water Crystal from the wizards' town. Although they succeed, Cecil and his crew wonder why they are robbing the Crystal from innocent people. When Cecil brings this up with the King of Baron, he is dismissed from his post as commander, and is asked to go destroy an Eidolon in Mist.

As a replacement, the king invites Golbez to take Cecil's place as the Red Wings commander with Kain Highwind as his second-in-command and monsters as the new crew. Golbez sends the Red Wings to steal other nations' Crystals, triggering the First Battle of Damcyan and the First Battle of Fabul. Both sieges succeed, and Golbez gains the Fire Crystal and the Wind Crystal. Cid is imprisoned when he finds out about this and refuses to give the king his latest airship. It is later revealed the king has been replaced with Cagnazzo, one of the Archfiends.

To get the Earth Crystal from Troia, Kain bribes Cecil by returning him an imprisoned Rosa Joanna Farrell in exchange for the Crystal, and uses the Red Wings to travel. Kain is soon freed of Golbez's control, and decides to help Cecil. Golbez still controls the Red Wings, and takes them to the underworld to find the Dark Crystals. The Red Wings battle the dwarves' tanks and although they prove unable to beat the dwarves militarily, they claim the dwarves' Crystal through Golbez's magic. The Red Wings are seen one final time as they chase the Enterprise around the Underground. However, Cid outsmarts them and detonates a bomb to destroy them, risking his life. The rest of the party escapes on the Enterprise.

What happens to the Red Wings after this is unknown, and it is assumed they are disbanded. Edge finds an abandoned Red Wing airship which he steals and names the Falcon.

When Cid recovers, he forms a new airship force that fights for good, and mobilizes the nations of the world to come together to battle the Giant of Babil.

The Red Wings transport Cecil and Rosa to Damcyan to celebrate its reconstruction. Biggs and Wedge accompany them.

Ceodore, the prince of Baron, joins the Red Wings as a squire and is accompanied by Biggs and Wedge to obtain his Proof of Knighthood from Mythril. The Red Wings are attacked by airborne monsters on their journey back to Baron, before crashing nearby Mysidia, leaving Ceodore as the sole survivor. The attack was orchestrated by the Mysterious Girl who takes control of Cecil and with Dark Kain instated as the head of Red Wings, the fleet is tasked with attacking the nations of the world to seize their Crystals as history repeats itself. They capture the Crystals of Fabul and Damcyan, but only succeeds in taking the one in Dwarven Castle with the help of a Maenad.

The spirits of Biggs and Wedge encourage Ceodore in the True Moon's Subterrane to stand against the Dark Knight, and save his uncle Golbez's life. After peace is restored to the world, Kain Highwind leaves the Dragoons to become the new Captain of the Red Wings.

Cecil's theme is called "The Red Wings," and it is mixed into the fanfare that plays when Cecil transforms into a Paladin. "Red Wings Ver.2" also exists, released only on the Final Fantasy Finest Box album, a Japan-exclusive limited edition free to the first 5,000 people who purchased all three Game Boy Advance games (Final Fantasy IV, Final Fantasy V and Final Fantasy VI) and sent proof of their purchase. The theme plays during Data install in Final Fantasy IV: The Complete Collection.

The "Red Wings" theme is also incorporated into the ending theme of Dissidia 012 Final Fantasy.

"Red Wings" is included on the first disc of the Final Fantasy Vinyls collector's edition set.

A live recording of "The Red Wings" is found on A New World: intimate music from Final Fantasy album.

The second page of the Clan Primer description of the Aeronite alludes to the Red Wings with the following:

The airship armadas of one far-off land display a blood-red wyvern wing as their heraldic crest. In this land, colors are used to distinguish class, with red being most auspicious and thus highest in rank, used both for the royal family and, it being a military state, for their elite fleet. This Redwing Armada is said to be the strongest in the world, and serves as an excellent deterrent to invasion.

The description to the Fortress of Trials Wonder (itself a reference to the original Final Fantasy) mentions this: Once a place of training for the royal guard in the ancient kingdom of Baron, this castle was lost in the Cataclysm. Graduates of the institution once filled the ranks of the Red Wings, a prestigious airship corps. Red Wings is also briefly mentioned in the errand called "Easy Come, Easy Go," where Count Minimas has been giving donations to them.

The Redwings appear with the Dark Knight Grissom as their boss. The Redwings' base is at Salikawood. They first appear after "The Sages" rumor, and are fought throughout a series of battles. During these quests, Clan Nutsy must fight the Falgabirds (a reference to the Four Fiends) and after defeating Grissom, a chain of missions that involve foreign monsters left by the Redwings appear. These series of battles could be played after the game has been completed.

In the battle against Grissom, while his in-game description and assigned job is "Dark Knight," his sprite and moves are that of a Paladin (likely a reference to Cecil Harvey who began as a Dark Knight in Final Fantasy IV, but later became a Paladin at Mount Ordeals). This, and the fact that the Red Wings control four elemental fiends, are likely references to Final Fantasy IV. 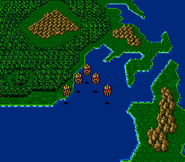 The battle on the airship (iOs).

Victory screen on the airship (iOS).

The Red Wings in The After Years (iOS).