Queen Brahne Raza Alexandros XVI
The Red Rose is Queen Brahne's personal airship named after her favorite flower in Final Fantasy IX. It is a large airship that operates on Mist that makes three separate appearances.

Queen Brahne uses the Red Rose to travel to Cleyra where she uses magic to teleport her black mage army within the city. Once General Beatrix has stolen Cleyra's crystal fragment and returned to the Red Rose, Brahne summons Odin to destroy the city. Before it is destroyed, Zidane, Vivi, and Freya teleport onto the Red Rose alongside the black mages and hide onboard, eavesdropping on Beatrix, who has begun to doubt her allegiance to the queen after receiving no gratitude for her feat. While the queen continues on toward Alexandria on the Red Rose, Zidane and his friends use the magical pods onboard the airship to teleport to Alexandria Castle to get there ahead of her.

Later, the queen orders Alexandria to invade Lindblum. As the battle rages on, she follows the fighting from the Red Rose until summoning Atomos to decimate the city.

After having conquered all of the Mist Continent, the queen stops using Red Rose for transportation as she sets her sights on the Outer Continent. As Outer Continent has no Mist for the vessel to use for power, Brahne uses the Alexandrian navy fleet instead. After Princess Garnet becomes the new queen of Alexandria, Mist has disappeared from the continent, rendering the Red Rose useless, but after Terra is destroyed by Kuja, the Iifa Tree covers the entire planet in Mist. When Zidane and his friends try to enter Memoria, which has appeared above the Iifa Tree, they are attacked by an army of silver dragons. Beatrix appears, commanding an airship fleet from the Red Rose, and joined by forces from Lindblum.

Iifa Tree collapsing marks the end of Mist in the world, thus the Red Rose was probably not used again after the Second Battle of the Iifa Tree.

Serino is the moogle on the airship. The letter the party delivers from Mopli in Cleyra to Serino on the Red Rose:

Serino gives a letter to deliver to Moodon at the Lindblum Inn. The letter the party delivers from Serino to Moodon:

One guildleve objective in Final Fantasy XIV is to retrieve the cargo of an airship named Red Rose. 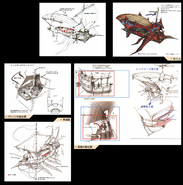 Concept art from The Art of Final Fantasy IX book.

The Red Rose during the Battle of Cleyra.

The rose has long been used as a symbol. It has always been an important symbol with anti-authoritarian associations.