Versatile mages, versed in both black and white magic.

The Red Mage is a job in Final Fantasy V obtained after the Water Crystal shatters. It is the second utility job in the game with access to limited White and Black Magic. Red Mage is one of the few mage jobs that can equip swords, as well as both rods and staves, giving them more offense in both physical and magical attacks.

The Red Mage requires the most ABP to master, as its final ability, Dualcast, requires 999 ABP and is one of two abilities in the game to require that much, the other being the Mime's Mimic.

Mastering Red Mage for all four characters in the mobile and Steam versions earns the achievement "Ebony and Ivory".

Red Mages wear red clothes, red capes, and a red hat with a feather, just like in the other Final Fantasy games. Krile's outfit has a slightly pink tint to it. Galuf's, Krile's, and Lenna's hats are right-sided, Bartz's and Faris's are at the classic left position.

Red Magic allows the use of White or Black Magic up to level 3. Dualcast lets the player use Red Magic (cast two level 3 Black or White Magic at once), but given to a Summoner, they will be able to summon two summons at once, and given to a Time Mage, they can cast two Time Magic spells at once. Giving a Red Mage White Magic 6 or Black Magic 6 will enable them to dualcast spells up to level 6 of that particular school of magic.

Red Mages can boost the power of any element as they can equip rods (for Fire, Ice, Lightning, and Poison), staves (Holy), and knives (Wind).

Any job equipped with Red Magic Level 1 will gain their character's base Freelancer Magic +6 if their default stat is lower. For each additional Red Magic level up to level 3, the Magic bonus is increased by 1 per level, for a maximum of +8 Magic at Red Magic Level 3.

Thus, the base Magic stat for a character with Red Magic equipped is as follows:

Similarly, any job equipped with Dualcast will also gain their character's base Freelancer Magic +8 if their default stat is lower.

Upon mastery, Freelancers and Mimes gain the Red Mage's base Strength, Agility and Magic unless they already have a higher base from another mastered job.

The job's innate command ability is Red Magic, and leveling up as a Red Mage allows the character's other jobs to use increasingly powerful spells with the skillset.

The Red Mage appears as a character card.

Faris as a Red Mage appears on a Triple Triad card in the version available via Final Fantasy Portal App. 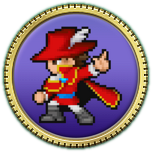