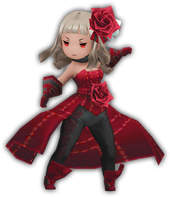 Wield a balance of both black and white magic.

The Red Mage (赤魔道士, Aka Madōshi?) is an asterisk that appears in Bravely Second: End Layer. It is obtained after defeating Fiore DeRosa.

The Red Mage is one of the most versatile jobs. With both white and black magic, along with notable physical capabilities, a Red Mage is a jack-of-all-trades, unfortunately not excelling any of them. In addition, they have numerous support abilities that grant BP in various situations, including their innate ability Revenge.

The Red Mage's specialty is Revenge. Its job command is B/W Magic.

Tiz as a Red Mage.

Edea as a Red Mage.

Yew as a Red Mage.
Add a photo to this gallery
Bravely Second: End Layer jobs and abilities
Retrieved from "https://finalfantasy.fandom.com/wiki/Red_Mage_(Bravely_Second)?oldid=3225174"
Community content is available under CC-BY-SA unless otherwise noted.