Red Mage (赤魔道士? or 赤魔道師, Akamadōshi?, lit. Red Sorcerer), sometimes abbreviated as RED or RDM (赤, Aka?, lit. Red), is a job class in the Final Fantasy series, and is featured in several installments. It is among the first job classes introduced in the series.

The standard Red Mage attire consists of red, black, and white clothing, including a red cloak with white or black trimmings, black boots and a red cavalier hat with a white feather.

The Red Mage is a jack-of-all-trades, but a master of none. They are, in essence, among the more versatile characters of the series though it comes at a price: their stats are usually low, and they cannot cast higher level spells or use stronger equipment. Red Mages typically cast both Black and White Magic and can also wield swords and equip armor that normal Black and White Mages cannot. Later entries would make the rapier the signature weapon of the Red Mage.

In most entries Red Mages can learn many spells, but are typically not the strongest, often borrowing novice and middle tier spells used by the White and Black Mages. Later entries would begin to add variety of new spells that could be exclusively used by Red Mages, such as Temper, Flurry, Ardor, and Jolt. In most games, Red Mages have the Dualcast special ability; sometimes localized as Chainspell or Doublecast, which boosts their spell casting efficiency.

First appearing as one of the basic six job classes, Red Mages can upgrade into the Red Wizard, which is distinctly versatile in both magic and weapons. Red Wizards can cast the third-tier level of elemental spells, such as Firaga. They can also cast Curaga, allowing them to function as a healer albeit lacking the party wide heals of White Mage and White Wizard.

The Red Mage is a job gained from the Wind Crystal. Red Mages use a wide assortment of weapons, and both Black and White Magic, but are unable to become true masters of either school of wizardry.

The Red Mage is available after visiting the Water Crystal in Walse Tower and marks the debut appearance of Dualcast in the series, as the Red Mage's final job skill.

The Red Mage (RDM) has access to White and Black Magic spells, but is especially proficient at buffing and debuffing spells, with its signature spell being the MP-restoring Refresh. Red Mages have reduced spell casting times and the ability to "Convert"—swapping their HP and MP values around. Because of their jack-of-all-trades set up, and survival skills, Red Mages have sufficient "solo" capability, depending on the content level.

Rainemard was an Elvaan Red Mage who was murdered before the game starts. Players can undertake a series of quests to investigate his murder mystery. In the Wings of the Goddess expansion, Rainemard is alive and can be recruited as a freelancer to help players in Campaign battles.

Represented by the zodiac sign of Cancer, Red Battlemage is the only class to use Arcane Magick. They can wield maces and greatswords.

A garb imbued with the soul of the red mage. It increases wearer's physical damage as well as magic damage in a balanced way.

Lightning obtains the Red Mage at the start of Day 2 from a treasure cube in the Ark. It raises maximum ATB by 20, but comes with a slight disadvantage of starting a battle with the ATB gauge filled at 50%. Its passive ability, Soul of the Red Mage, raises Lightning's Strength and Magic by 8%. The garb comes with locked abilities Light Slash Lv. 2 and Buster Euin Lv. 2.

To complete the look of the Red Mage garb, the player can acquire the Red Mage's Chapeau adornment as a reward for defeating the superboss Ereshkigal in the Ultimate Lair.

Red Mage (RDM) is a job that came with the second expansion, Stormblood. They are a DPS class armed with rapiers and a magicked crystal medium. The job is described as "a hybrid ranged/melee style achieved via high-speed positioning."

Red Mage (RED) is a job available to viera. Red Mages are a small blend of Black and White Mages, and also have a few status effect spells.

They have well-rounded stat growth between physical and magic attack power, and are much sought for their extremely useful Doublecast ability. Even when silenced, they can still dish out decent physical damage with rapiers with their surprisingly good Attack Power.

Red Mages are versatile as they have good Magick and Strength. They are good mages as they can use Black, White, and Green Magick, as well as the ability Doublecast that can be used not only on Red Magick, but on any other magick (recommended for Summoner) as long as the player has them as the secondary A-ability.

Julius disguises himself early on as a Red Mage from the original Final Fantasy, he attacks the enemy with fireballs.

Red Mages are enemies that invade Mira's tower in order to destroy the crystal in the top floor.

Elgo bears the Red Mage job class. The Warriors of Light obtain access to this job with the completion of the chapter featuring that character: "Tome of Dawn". It is one of the standard jobs available to both groups.

A Red Mage appears as an obtainable signet summon and character costume.

Jornee gets an alternate costume based on the Red Mage job from the "Phantom Beast Great Decisive Battle!" event. The costume can only be seen when Jornee is equipped with the "Red Mage Equipment" accessory. Whoever equips the accessory will gain 20% magic critical chance, along with 80 magic and 30 speed. 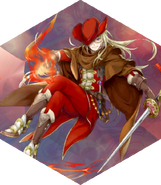 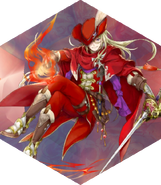 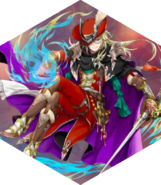 In the Duel Colosseum, when selected, the Red Mage job card will cause the cards at the selection area not to be discarded while not chosen. In the North American, European and Universal Tuning versions, it also makes Treasure Cards cost 0 medals. This is great for those who want to obtain a lot of treasure with minimal expense, especially with the Thief job card active as well.

The Red Mage job card appears in Labyrinth mode, and halves the cost of Treasure cards.

The Red Mage specializes in intelligence abilities and is available from the start. The preferred weapons are swords and staves. The job is involved in the requirements to unlock the Dancer and Blue Mage jobs.

The Red Mage appears as a character card.

The Red Mage is a character available to the party, he uses the Dualcast ability during battle. It unlocks at level 36.

These warrior mages bring a variety of talents to the party, from white and black magic, to skill with melee weapons, enabling them to adapt swiftly to the changing tides of battle.

Red Mage appears as a recruitable character unlocked as the First Time Reward for completing Darill's Tomb in the Classic mode in Final Fantasy VI storyline.

Red Mage is a job unlocked after learning Curaga, Firaga, and Graviga. The Red Mage is a flexible damager and tank with the ability to quickly cast a chain of spells.

Red Mage is a summonable job for Wol, and upgrades to Sorcerer and later Crimson Sage. The Red Mage cannot equip other weapons than staves, and has very low health. He makes up for this with very high offensive stats.

Several titles have featured allusions to the Red Mage job.

Red Mage's hat appears as an adornment for monsters, as an allusion to the job in Final Fantasy XIII-2.

In Final Fantasy Crystal Chronicles: Echoes of Time, Del Dee is a mercenary who is dressed as a Red Mage and boasts a high level of magic, but mentions when the player hires him that he is mainly into fashion and dislikes fighting. 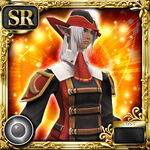 The Red Mage version from Final Fantasy XI appears as a card.

Red Mage and Red Wizard are units and their ability is Pride's Courage. Red Mage can be promoted to Red Wizard.

The Red Mage appears on a gold card.

The Red Mage appears as a job. The Red Mage can equip a swords and rods, and wielding magic spells.

In Kingdom Hearts Union χ[Cross], players can have their male avatar dress like the Red Mage from Final Fantasy Record Keeper. 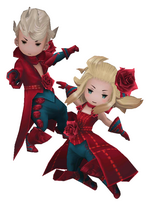 The Red Mage job appears in several titles in the Bravely series. In the original Bravely Default and Bravely Second: End Layer, the Red Mage is obtained after defeating Fiore DeRosa, the holder of the job asterisk. It has a very distinct appearance from the traditional Red Mage outfit, wearing red rose-decorated outfits. The Red Mage is one of, if not the most versatile jobs, having access to both White and Black Magic. In addition to its standard abilities, the Red Mage also has abilities that let them gain extra BP when certain battle conditions are met.

In Bravely Default II, the Red Mage is obtained from Roddy McGranate, who holds the asterisk. Unlike the traditional Final Fantasy inspired Red Mage, the job in Bravely Default II learns its own exclusive spells - Aero, Stone, and Heal. In addition, the job has the innate trait that allows the caster to imbue status ailments into their elemental spells.

The 8-Bit Theater character Red Mage Statscowski is based on this job.

The original Famicom version of Final Fantasy III was planned to include upgraded jobs like the first entry, with an upgraded version known as the Red Magus set to appear.[1] However, due to some of the staff finding the job change sprites scary from their cute previous forms in the original NES release of Final Fantasy, the idea of the class change was abandoned in future releases by Hiromichi Tanaka.[2][3] Starting from Final Fantasy III, the Red Wizard/Red Sorcerer would become the recurring job known as Red Mage in all later series entries, often sharing the cute appearance of the Red Mage job from the first Final Fantasy.

Bartz from Final Fantasy V as a Red Mage. 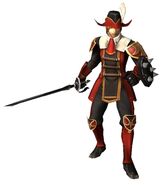 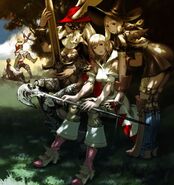 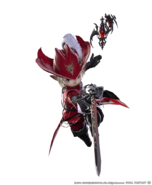 A viera Red Mage in Final Fantasy Tactics A2: Grimoire of the Rift. 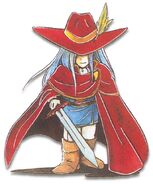 Julius disguised as a Red Mage in Final Fantasy Adventure.

Red Mage adventurer in Final Fantasy Crystal Chronicles: My Life as a Darklord. 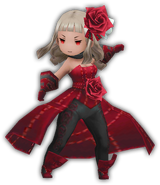 Magnolia as a Red Mage in Bravely Second: End Layer.

The job in Final Fantasy Dimensions. 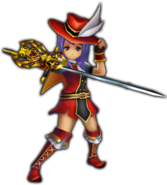