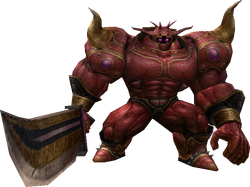 Red Giant (ウルフラマイター, Urufuramaitā?, lit. Wolframiter), also known as Wolframiter, Gemini, and Wolfmeister, is a recurring enemy in the series. It is a member of the Iron Giant family.

The Red Giant has gone by a variety of names. Its Japanese name is "Wolframiter": "Wolframite" with the "er" word-ending. In its original appearance in Final Fantasy VII the name was erroneously localized as "Wolfmeister" (would would be written ウルフマイスター (Urufumaisutā?) in Japanese).

In its other appearances no attempt has been made to keep the original Japanese meaning. Its common name, "Red Giant", originating in Final Fantasy VIII, refers to its status as a red version of the Iron Giant.

"Red Giant" wouldn't apply in Final Fantasy X where the enemy appears as a pair of red and blue enemies, so they were named Gemini. In Final Fantasy X-2 only one of the pair returns, losing this context.

This enemy is found in the Lunar Subterrane and the Lair of the Father. It has low attack power, but very high HP and defense. It counters any magical attack with Self Destruct.

Wolfmeister is an enemy fought on the train to North Corel, and is only fought once in the game. It attacks using physical attacks and the Atomic Ray skill. 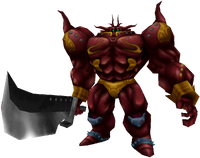 Two versions of the Gemini are fought together in the final dungeon, one blue giant wielding a sword and one red giant wielding a club. When together, they can attack using the skill Double Reaper, while alone they fight using Reaper and Leaping Swing. 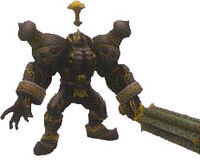 Only the red Gemini returns as an enemy fought at Besaid, Thunder Plains, Mt. Gagazet, and Via Infinito floors 21-23. It fights using the physical attacks Skullcracker and Reaper, and when in Oversoul, will instead use a wide arrange of -aga elemental magic in addition to White Mage-Hater.

Red giants are daemons fought in the Costlemark Tower in Duscae and in Insomnia in Chapter 14. They also appear at night after an iron giant has been felled. They wield colossal flaming swords and resist most attacks.

Other red-colored giant-type enemies also appear as tougher versions of the red giant.

Red Giant is a tougher version of the regular iron giant and under Auto-Regen. It can be killed with a Killsight strike. 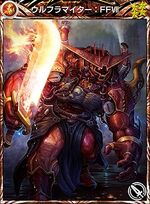 [view · edit · purge]Wolframite is a tungsten-based mineral containing iron, and is a primary source of tungsten ore.

Enemies
Retrieved from "https://finalfantasy.fandom.com/wiki/Red_Giant?oldid=3149148"
Community content is available under CC-BY-SA unless otherwise noted.