Recover (かいふく or 回復, Kaifuku?), also known as Heal, Remedy, Restore, Heal 3, Restore III and Recovery, is a recurring ability in the series that either removes status ailments or restore HP.

Despite sharing the same English name, the ability has no relation to the Recover ability that appears in Final Fantasy Dimensions.

Restore III (originally called Recover and Heal 3) is an enemy ability used by Borghen and the Beast Devil that restores a moderate amount of HP to the target; it is the equivalent of a Hi-Potion.

Recover functions as an Esuna-type ability to the party for free, and is learned through the Chemist class at level 4 for 135 ABP. Recover removes darkness, mini, toad, silence, confuse, paralyze, old, and sleep. The ability was meant to remove petrify as well, but does not do so.

Recover is learned from the Guardian Force Leviathan for 200 AP. It can also be learned by any GF with the item Healing Ring, provided there is a space for the GF to learn this ability. It restores all HP to one target, and can instantly inflict 9,999 damage on any undead enemy or target afflicted with Zombie.

Recover is an ability that has infinite uses, it also increases a Robot's HP by 9. The target that has this ability will recover 10% of maximum HP automatically during battle at the end of every round. It can be used by Anubis, Behemoth, Byak-Ko, Cancer, CatWoman, Corpuscl, Earth, Hydra, Jorgandr, Kirin, Rakshasa, Revenant, Su-Zaku, Susano-O, Toadstol, Treant, WereRat, WereWolf, and Fenrir.

Recovery is the third ability for the Wayfarer class and cost 3 AP to use. It gives the Regen status, causing the user to recover some HP each turn.

This section about a spell in Pictlogica Final Fantasy is empty or needs to be expanded. You can help the Final Fantasy Wiki by expanding it. 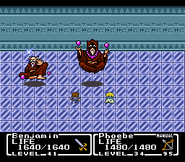