It was a collaboration between Square Enix and Real Escape Game from Japan, produced by SCRAP where participating teams solved mysteries with the help of clues within a time limit to escape given scenarios.

The first live event was hosted in Tokyo, Japan on the 10th February 2017 with several other subsequent events taking place throughout various cities in Japan until ending on the 14th May 2017.

Once awakened from thousands of years of sleep, the dragon god Bahamut burned down the entire Eorzea with a scorching fire, putting the world in danger of extinction.

It was the great sage Louisoix Leveilleur and the "warriors of light" who saved the world from the ruin.

With their success, Bahamut disappeared, Eorzea was reborn, and the world regained peace.

Bahamut, which should have disappeared, is about to be revived deep underground in the huge ruins.

The time left until the resurrection is "60 minutes".

Can you, along with your peers, prevent the resurrection of Bahamut?

- A fierce battle involving the entire Eorzea is about to begin. 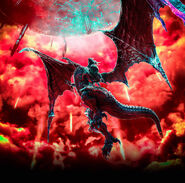