Razzia (シュメルツェンド, Shumerutsendo?, lit. Schmerzende) is a recurring ability in the series used by Sandy of the Magus Sisters.

Razzia is an enemy ability used by Sandy, which inflicts moderate non-elemental damage to one target.

The first and second signets of Wrieg's Sandy eidolon have the summon attack of Razzia, which deals fire-elemental damage to all enemies. Using Razzia costs 2 bars from the Summon Gauge.

Razzia is an enemy ability used by Sandy's Final Fantasy X version, and inflicts non-elemental physical damage to one target. 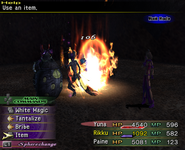