Razor Weed is an enemy from Final Fantasy VII fought on the world map in the Wutai Area, and in the opening round of the Battle Square after acquiring Highwind and Gold Saucer has reopened. When fought in the Battle Square its stats are enhanced with double the regular HP and its Attack and Magic Attack are increased by 25%. It has the useful Magic Hammer Enemy Skill and is thus an enemy worth seeking out.

Razor Weed is not a serious threat, but the powerful Magic Hammer Enemy Skill can be learned from it. Since Razor Weed will not use Magic Hammer by itself, one must first manipulate it to cast Magic Hammer on the character(s) with the Enemy Skill Materia equipped. Attacking Razor Weed causes it to counter with Spaz Voice, which may inflict Fury. This could be both a benefit and detriment for the "Stolen Materia" quest in Wutai, as the party will fill their Limits faster, but miss more of their physical attacks during a time Materia is unavailable. If the player wants to fight Razor Weeds before the "Stolen Materia" quest automatically starts by approaching the rope bridges in the Wutai Area after having recruited Yuffie, there is a patch of grass on the southern end of Wutai near to where the Tiny Bronco can land. 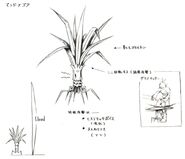 Spaz Voice.
Add a photo to this gallery

Retrieved from "https://finalfantasy.fandom.com/wiki/Razor_Weed_(Final_Fantasy_VII)?oldid=3388639"
Community content is available under CC-BY-SA unless otherwise noted.