Magic damage to all opponents

Slashes at all enemies with a cutting wind.

Razor Gale is available to Sabin at level 30.

Gogo can also use any Blitz techniques that Sabin has learned by equipping Blitz in Gogo's ability menu. This allows Gogo to use Razor Gale.

In prior versions of the game:

As a magic damage ability with a spell power of 78, it deals damage with the following formula:

Razor Gale deals heavy magic damage to multiple opponents. At a spell power of 78, its damage is between level 2 spells (Fira, Blizzara, and Thundara) and level 3 spells (Firaga, Blizzaga, and Thundaga). It ignoring split damage means its damage is not far below group-cast level 3 spells, and the considerable MP cost of level 3 spells makes Razor Gale a wiser choice. The extent of its damage depends on Sabin's stats, but is more affected by the enemy's elemental resistance and resistance to magic damage; against groups of enemies weak to wind, it is exceptionally powerful, but enemy formations including enemies that absorb wind will fare much better.

Razor Gale is Sabin's strongest Blitz technique against multiple targets, outclassing Rising Phoenix dealing almost twice as much damage. Rising Phoenix is still somewhat better against enemy formations with enemies weak to fire, but Razor Gale should be used in any other instance. Razor Gale also deals more damage than the single-target Blitz technique Aura Cannon, though Aura Cannon can deal more damage if the target is weak to holy damage.

Later, the Phantom Rush technique deals much greater damage than Razor Gale and is non-elemental, but is single-target. Razor Gale is still more efficient against three or more enemies and against enemies weak to wind, but in other cases, Phantom Rush is the better choice. In both cases, since magic damage is used in both the main Blitzes, players should should level Sabin up with magicite equipped to boost his Magic stat. Due to Gogo's naturally higher Magic stat, Gogo benefits greatly from using Razor Gale. 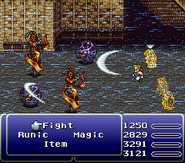