A saber that casts Scourge when used.

Razer is a mid-ranked sword that provides 22 Attack, 20 Accuracy, 37 Critical, can be used by the Knight, Ninja, and Red Wizard jobs. When used as an item during battle, casts the Scourge spell. It is found in the Flying Fortress.

A sword that came from a faraway world. It is imbued with powerful poison magic. Its name may cause some to mistakenly believe it to be able to raise the dead, but no such effect has been witnessed. In that faraway world, it can be obtained in the Flying Fortress.

Razer (FFI) is a Sword that is obtained from the Final Fantasy exploration event, Flying Fortress. It provides 110 ATK, 38 DEF, increases ATK/DEF by 10%, and has a 20% chance to counter physical attacks with Scourge once per turn. 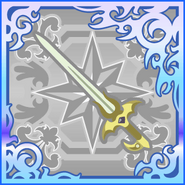 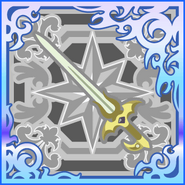