Hahahaahaha! To live is but to fight! Art thou warrior or craven? Very well. I, Ravana, fourfold master of the blade, do accept thy challenge!

Ravana is a primal introduced in Final Fantasy XIV: Heavensward. He is known as the Savior of the Gnath.

Unlike other primals, Ravana was created for Final Fantasy XIV rather than being based on previous summons in the Final Fantasy series.

Ravana is summoned into being when the Gnath's lust for war against the Dravanians reaches a fever pitch as a consequence of a dragon wounded by the Ishgardians crashing into their nest. Ravana is the cause of the Gnath belligerently attacking the inhabitants of the Dravanian Forelands. The adventurer and Ysayle, needing to see Hraesvelgr, challenge Ravana to a duel with the primal vowing to quell the Gnaths' bellicosity if defeated while having his opponents promise to become his servants should he be victorious. After a hard battle, Ysayle having been defeated in her Shiva form, the adventurer is victorious and Ravana honors his promise to have the Gnath cease their campaign.

Ravana reappears in patch 3.1, battling the Warriors of Darkness, but is easily defeated.

A unique form of Ravana is fought once again, when he has been resummoned by Vath and Gnath alike who had been kidnapped by the Telophoroi. This version of Ravana is known as Lunar Ravana, and is defeated by Alisaie Leveilleur and G'raha Tia.

Fourfold master of the blade, savior of the insect-like Gnath tribe.
A warrior and conqueror, Ravana respects strength and abhors weakness. He revels in battle with worthy opponents, and is known to wield the legendary Chandrahas blades.

Ravana is fought as a boss in trial

Ravana has two battle themes. The battle starts with "The Hand that Gives the Rose" playing in the background. The second theme "Unbending Steel" will start playing after he uses his ultimate attack. 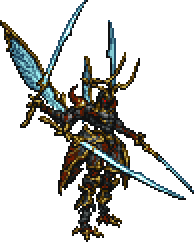 Ravana appears as a card in Triple Triad in the version playable via Final Fantasy Portal App.

CG "sculpture", before texturing and animation.

Ravana before using his ultimate attack.

[view · edit · purge]Ravana (Sanskrit: रावण) is a legendary, demonic king of Sri Lanka, said to have ruled the island 6,000 years ago. He is shown to have ten heads and twenty arms. After attaining the graces and blessings of the Gods Brahma and Shiva, Ravana is made invulnerable to Gods, Demons, and Spirits. Humans are excluded since Ravana does not see them to be a threat. Ravana is the central villain of the Sanskrit epic Ramayana, in which he is depicted as reigning supreme over all of creation due to his immeasurable power, having subdued even the heavens; however, his downfall begins as he steals Sita, the wife of the hero, Rama, the God Vishnu in human form. Rama travels to Sri Lanka and defeats Ravana's army, then kills the demon king with an arrow targeted at his source of immortality.

His weapons, the Chandrahas, are based upon the sword said to wielded by Ravana upon being gifted to him from Shiva.