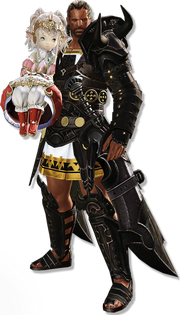 Bwahaha! The battlefield is the best and worst of places. Where else can a man's enemy become his mentor, or an ally his enemy?

Flame General Raubahn Aldynn is a non-playable character in Final Fantasy XIV. He is the leader of Ul'dah's Grand Company, the Immortal Flames. He was once a resident of Ala Mhigo before its fall to the Garlean Empire.

By buying the Coliseum in Ul'dah using his winnings as a champion Gladiator, he earned himself a place in the Syndicate. Unlike the rest of the Syndicate, he is faithful to the Sultana Nanamo Ul Namo and has reinstated the Immortal Flames as a means for the Sultanate to combat the impending threat of the Garlean Empire.

The line between victory and defeat is drawn by the swift and trod by the dead.

Raubahn is a male Highlander Hyur with brown cornrow braids and a beard. On his back he wears his two large swords and a shield.

Raubahn was born in Coldhearth, a small hamlet in the Peaks of Gyr Abania. Like many other Ala Mhigans living in the rugged highlands, Raubahn sought a career in military. Among his earliest combat action were skirmishes with Garlean patrols on the Ilsabard border. During the reign of the tyrant Theodoric, the King of Ruin, the firebrand Curtis Hext once visited Coldhearth to rally others to rebel against the mad king. A young Raubahn aned Ilberd attended his speech, where he wrote the slogan "Liberty or Death" on the Aldynn home.

Following the sudden Garlean invasion by Gaius van Baelsar after the civil war, Raubahn fled westward into greater Eorzea. He eventually came upon Ul'dah, where he was arrested for suspected espionage and sentenced to the Bloodsands. He made a career as the renowned gladiator "the Bull of Ala Mhigo". During this time, he met a young Lalafell named Pipin Tarupin who was sold to slavery to pay his father's debts; Raubahn used his prize money to emancipate the lad and acquire legal guardianship.[1]

In time, Raubahn's illustrious career allowed him to buy his way into a seat on the Syndicate. Fiercely loyal to the young Sultana Nanamo Ul Namo, he reorganized Ul'dah's military into the Immortal Flames to face the threat posed by Nael van Darnus and Project Meteor.

All these years, I've been made to dance to their tune... How could you, Roaille? How could you side with them...? Those cankers who take from this land and give naught in return─who use their power to disempower, and grow fat while the people starve! I know you can hear me, Monetarist scum! Your crimes will not go unpunished! One day, I will purge this land of your sickness! Before the eyes of the Twelve, I swear it!

Raubahn is seen during an Echo flashback to the Battle of Carteneau. Despite wanting to press the battle, he reluctantly agrees with the other leaders to call for a retreat. He and the Sultana later host a memorial service for the fallen of Carteneau.

Once Gaius van Baelsar issues his ultimatum, Raubahn and the other alliance leaders discuss what their response is. They consider capitulation in light of the struggles after the Calamity, but the timely arrival of Minfilia and the regrouped Scions convinces them to resist the Imperial threat once again. The Eorzean Alliance readies Operation Archon to eliminate Gaius and his trump card, the Ultima Weapon. Raubahn himself led the main offensive against Gaius's fortress at Castrum Meridanum, and serves as the Adventurer's contact for the final few Main Scenario quests.

Thanks to Alphinaud's influence, Raubahn arranges an audience with the Sultana and the Syndicate for Lady Yugiri of the Doman refugees. She tells of the troubles within the Garlean Empire and how it affected Doma, and asks for asylum. Though both Nanamo and Teledji Adeledji were born willing to grant Yugiri's request, Lolorito's counter argument ultimately has the Syndicate decide against granting asylum by majority vote. Soon after, during the events of "Defenders of Eorzea", Raubahn heads up an investigation into rioting breaking out in Ul'dah due to unrest from other refugees. When Raubahn learns the Adventurer and Alphinaud had conducted an independent investigation, he invites them to a confidential meeting with himself and the Sultana as they reveal that Teledji had instigated the riots for his agenda to acquire Omega.

Raubahn meets with his old friend Ilberd, who has become Grand Marshal of the newly created Crystal Braves. Investigating the activities of traitor within the Eorzean Alliance ranks known as "The Ivy", who has been making deals with heretics working for Lady Iceheart, Raubahn learns the traitor to be his right-hand Grand Flame Marshal Eline Roaille. Ultimately, revealed to be a Garlean spy, Roaille escapes. Later, while speaking with Ilberd and Alphinaud in private over Roaille's activities, Raubahn is trouble that Roaille has also been feeding information to the Monetarists in addition to Garlemald and the Harriers. As Alphinaud and the Crystal Marshal took their leave, Raubahn cursed the Monetarists and vowed to end their sway over Ul'dah.

Once the Dravanian Horde was driven back by a token force aiding Ishgard, Ul'dah hosts a celebration once the battle is successfully won. During the event, Nanamo Ul Namo is presumably assassinated and an enraged Raubahn slays Teledji, the culprit, when he mocks the Sultana. But Raubahn finds himself betrayed by Ilberd, who severs one of Raubahn's arms and reveals his own involvement in the assassination. Although badly wounded, believing that Lolorito is the mastermind behind Nanamo's death, Raubahn fights Ilberd, but is eventually defeated and imprisoned. Shortly after these events, Raubhan's adopted son Pipin Tarupin returns to Ul'dah from his latest assignment, and swears to clear his father's name.

Raubahn eventually learns the truth that Lolorito learned of Teledji's scheme and allowed it to occur, substituting the poison for a sleep-inducing potion, so his own two rivals would kill each other. Furthermore, Ilberd had been in the employ of Lord Lolorito since the inception of the Crystal Braves on the promise of a liberated Ala Mhigo. However, considered a traitor to their homeland by his friend, Raubahn was almost executed by Ilberd against Lolorito's wishes before the Adventurer, Alphinaud, and Yugiri Mistwalker rescue Raubahn. Soon after meeting Lolorito, Raubahn is given the antidote so he can revive Nanamo. After the defeat of Archbishop Thordan VII, Raubahn is present during the ceremony in which Ishgard rejoins the Eorzean Alliance.

The Gears of Change

Some time later, Ishgard hosts a Grand Melee, a friendly mock battle between the forces of the Eorzean Alliance. Raubahn participates in this event, and proves that even when missing an arm, he is a formidable warrior. The Grand Melee concludes with a one-on-one duel between Raubahn and the Adventurer, and though he is defeated, he is left elated at the thrill of the battle.

The Far Edge of Fate

Ilberd, under the guise of The Griffon, frames the Eorzean Alliance in a false-flag operation on Baelsar's Wall and sacrifices himself and his followers to summon a terrible primal to lay waste to Garlemald. Following the activation of Omega to contain the new threat, the terrible dragon god being dubbed Shinryu by Doman witnesses, the Eorzean Alliance decides to take an initiative to retake Ala Mhigo before the inevitable Garlean reprisal.

In the closing scenes of Heavensward, Pipin reports the successful capture of Baelsar's Wall to Raubahn. As he stands near where Ilberd fell, he declares to him that he will liberate their homeland. "For the both of us."

Raubahn oversees the operations to retake Gyr Abania and Ala Mhigo from the Garlean Empire.

Following the surprise attack on Rhalgr's Reach by the XIIth Legion, Raubahn brings reinforcements in the aftermath, where he helps the Warrior of Light to their feet after being knocked out by Zenos yae Galvus.

Once the Scions return following the liberation of Doma, Raunahn makes plans to renew the push further into Gyr Abania and attempts once again to take Castellum Velodyna. Once M'naago succeeds in taking the flag and Fordola rem Lupis retreats, the stronghold is captured and they move into the Peaks, where Ala Ghiri is taken with no resistance. During an assault on Specula Imperatorix, Raubahn and Pipin lead the charge but are forced to withdraw after Fordola opens fire on one of the watchtowers with Castrum Abania's cannon. Further offences are put on hold until the Scions can ensure the cannon is disabled.

Following the success at Castrum Abania, Raubahn asks the Warrior of Light and Lyse to come with him to his home village. There outside his old home, he recounts past and how Lyse's father met him all those years ago (prompting an Echo flashback of Curtis's rally) and wrote "Liberty or Death" on his house, still legible after all these years.

Later, as they prepare for the final assault on Ala Mhigo, Raubahn bequeaths one of his gladiator swords, Tizona, to Pipin (no longer able to dual-wield). He and Pipin lead the charge into the breached gate of the city proper, and later reconvene with the Warrior of Light and the Scions at the Royal Menagerie following the death of Zenos.

Raubahn was developed for the Seventh Umbral Era storyline. He is named after Raubahn from Final Fantasy XI, captain of Empire of Aht Urhgan's Immortal Lions.

Raubahn appears with an earth-elemental card depicting his official render.

Raubahn Aldynn.
Add a photo to this gallery

Stormblood
Add a photo to this gallery

Raubahn alongside the other two Company leaders.

Raubahn battling in The Fringes.
Add a photo to this gallery

Ul'dah political diagram.
Add a photo to this gallery