Bwahaha! The battlefield is the best and worst of places. Where else can a man's enemy become his mentor, or an ally his enemy?

Flame General Raubahn Aldynn is a non-player character in Final Fantasy XIV. He leads Ul'dah's Grand Company, the Immortal Flames. He was once a resident of Ala Mhigo before its fall to the Garlean Empire.

By buying the Coliseum in Ul'dah using his winnings as a champion Gladiator, Raubahn earned himself a place in the Syndicate. Unlike the rest, he is faithful to Sultana Nanamo Ul Namo and has reinstated the Immortal Flames as a means for the Sultanate to combat the impending imperial threat.

Raubahn was born in Coldhearth, a hamlet in the Peaks of Gyr Abania. Like many other Ala Mhigans living in the rugged highlands, Raubahn sought a career in military. Among his earliest combat actions were skirmishes with Garlean patrols on the Ilsabard border. During the reign of the tyrant Theodoric, the King of Ruin, the firebrand Curtis Hext once visited Coldhearth to rally others to rebel against the mad king. A young Raubahn and Ilberd attended his speech where he wrote the slogan "Liberty or Death" on the Aldynn home.

Following the sudden Garlean invasion by Gaius van Baelsar after the civil war, Raubahn fled westward into the greater Eorzea. He came upon Ul'dah where he was arrested for suspected espionage and sentenced to the Bloodsands. He made a career as the renowned gladiator "the Bull of Ala Mhigo" and met a young Lalafell named Pipin Tarupin who was sold to slavery to pay his father's debts; Raubahn used his prize money to emancipate the lad and acquire legal guardianship.[2]

Raubahn's illustrious career allowed him to buy his way into a seat on the Syndicate. Fiercely loyal to the young Sultana Nanamo Ul Namo, he reorganize Ul'dah's military into the Immortal Flames to face the threat posed by Nael van Darnus and Project Meteor.

All these years, I've been made to dance to their tune... How could you, Roaille? How could you side with them...? Those cankers who take from this land and give naught in return─who use their power to disempower, and grow fat while the people starve! I know you can hear me, Monetarist scum! Your crimes will not go unpunished! One day, I will purge this land of your sickness! Before the eyes of the Twelve, I swear it!

Raubahn is seen during an Echo flashback to the Battle of Carteneau. Despite wanting to press the battle, he agreed with the other leaders to call for a retreat. He and the sultana later host a memorial service for the fallen of Carteneau.

Once Gaius van Baelsar issues his ultimatum, Raubahn and the other alliance leaders discuss their response. They consider capitulation in light of the struggles after the Umbral Calamity, but the timely arrival of Minfilia Warde and the regrouped Scions convinces them to resist the imperial threat. The Eorzean Alliance readies Operation Archon to eliminate Gaius and his trump card, the Ultima Weapon. Raubahn leads the main offensive against Gaius's fortress at Castrum Meridanum, and serves as the Warrior of Light's contact.

Thanks to Alphinaud Leveilleur's influence, Raubahn arranges an audience with the sultana and the Syndicate for Lady Yugiri Mistwalker of the Doman refugees.[3] She tells of the troubles within the Empire and how it affected Doma, and asks for asylum. Though both Nanamo and Teledji Adeledji are willing to grant Yugiri's request, Lolorito's counter argument has the Syndicate decide against granting asylum by majority vote. Raubahn heads an investigation into rioting breaking out in Ul'dah due to unrest from other refugees. When he learns the Warrior of Light and Alphinaud had conducted an independent investigation, he invites them to a confidential meeting with himself and the sultana. They reveal Teledji had instigated the riots for his agenda to acquire Omega.

Raubahn meets with his old friend Ilberd who has become Grand Marshal of the newly created Crystal Braves.[4] Investigating the activities of traitor within the Eorzean Alliance ranks known as "The Ivy", who has been making deals with heretics working for Lady Iceheart, Raubahn learns the traitor to be his right-hand Grand Flame Marshal Eline Roaille. Revealed to be a Garlean spy, Roaille escapes. While speaking with Ilberd and Alphinaud in private over Roaille's activities, Raubahn is troubled that Roaille has also been feeding information to the Monetarists in addition to Garlemald and the Harriers. As Alphinaud and the Crystal Marshal leave, Raubahn curses the Monetarists and vows to end their sway over Ul'dah.

Once the Dravanian Horde is driven back by a token force aiding Ishgard, Ul'dah hosts a celebration.[5] Nanamo Ul Namo is presumably assassinated, and an enraged Raubahn slays Teledji, the culprit, when he mocks her. Ilberd betrays Raubahn, severing one of his arms and revealing his own involvement in the assassination. Badly wounded, believing that Lolorito is the mastermind behind Nanamo's death, Raubahn is defeated by Ilberd and imprisoned. His adopted son Pipin returns to Ul'dah from his latest assignment, and swears to clear his father's name.

Raubahn learns the truth that Lolorito learned of Teledji's scheme and allowed it to occur, substituting the poison intended for the sultana for a sleep-inducing potion so his rivals would kill one another. Ilberd had been in the employ of Lord Lolorito since the inception of the Crystal Braves on the promise of a liberated Ala Mhigo. His friends now considering him a traitor to their homeland, Raubahn is almost executed by Ilberd against Lolorito's wishes before the Warrior of Light, Alphinaud, and Yugiri Mistwalker rescue him. After meeting Lolorito Raubahn is given the antidote so he can revive Nanamo. After Archbishop Thordan VII is defeated, Raubahn attends the ceremony in which Ishgard rejoins the Eorzean Alliance.

Ishgard hosts a Grand Melee, a friendly mock battle between the forces of the Eorzean Alliance.[6] Raubahn participates and proves that even when missing an arm he is a formidable warrior. The Grand Melee concludes with a one-on-one duel between Raubahn and the Warrior of Light, and though he loses, Raubahn is left elated at the thrill of the battle.

Ilberd, under the guise of the Griffon, frames the Eorzean Alliance in a false-flag operation on Baelsar's Wall and sacrifices himself and his followers to summon a terrible primal to lay waste to Garlemald.[7] Following the activation of Omega to contain the new threat, the Doman witnesses dub the dragon god Shinryu. The Eorzean Alliance takes an initiative to retake Ala Mhigo before the inevitable Garlean reprisal. Pipin reports the capture of Baelsar's Wall to Raubahn. As he stands near where Ilberd fell, he declares to liberate their homeland "for the both of us."

Raubahn oversees the operations to retake Gyr Abania and Ala Mhigo from the Garlean Empire. Following the surprise attack on Rhalgr's Reach by the XIIth Legion, Raubahn brings reinforcements and helps the Warrior of Light to their feet after being knocked out by Zenos yae Galvus.

Once the Scions return following the liberation of Doma, Raubahn makes plans to renew the push further into Gyr Abania and again attempts to take Castellum Velodyna. Once M'naago takes the flag and Fordola rem Lupis retreats, the stronghold is captured and they move into the Peaks where Ala Ghiri is taken without resistance. During an assault on Specula Imperatorix, Raubahn and Pipin lead the charge, but are forced to withdraw after Fordola opens fire on one of the watchtowers with Castrum Abania's cannon. Further offenses are put on hold until the Scions can ensure the cannon is disabled.

Following the success at Castrum Abania, Raubahn asks the Warrior of Light and Lyse Hext to accompany him to his home village. Outside his old home he recounts his past and how Lyse's father met him years ago (prompting an Echo flashback of Curtis's rally) and wrote "Liberty or Death" on his house, still legible. Later, as they prepare for the final assault on Ala Mhigo, Raubahn bequeaths one of his gladiator swords, Tizona, to Pipin (no longer able to dual-wield). He and Pipin lead the charge into the breached gate of the city proper, and later reconvene with the Warrior of Light and the Scions at the Royal Menagerie following Zenos's death. Knowing his true desire to stay in Ala Mhigo, Nanamo dismisses Raubahn from the Immortal Flames and the Syndicate, allowing him to stay, his Uldahn posts being succeeded by Pipin.[8] Lyse assigns him the command of Ala Mhigan army.

Raubahn is a male Highlander Hyur with brown cornrow braids and a beard. He wears his two large swords and a shield on his back.

Following the banquet in Ul'dah, Raubahn lost his left arm in a battle with Ilberd Feare. He conceals his severed limb with a black cloak and his bull-themed pauldron.

The line between victory and defeat is drawn by the swift and trod by the dead.

Bold, proud, fierce and honorable, Raubahn is a true warrior-born leader and a hearty survivor. Though Raubahn regrets the fall of his homeland, he doesn't allow it to consume his every thought as Ilberd did. He forged a new life in Ul'dah as a gladiator and later as a member of the Syndicate.

Despite his fierce nature, Raubahn has a kind heart. He is loyal to his sultana, being the sole royalist on the Syndicate. His devotion runs deep, sometimes close to a paternal instinct, as he seems to sense when she is in danger. He is devastated when it was believed she had been assassinated. He rescues a young Pipin Tarupin from the gladiator arenas and adopts him. He treats the Warrior of Light and the Scions of the Seventh Dawn as honorable warriors and respected friends, never doubting them even after they are accused of assassinating the sultana.

There are moments where Raubahn allows his fury to get the better of him. When Teledji Adeledji mocks the presumed deceased sultana, Raubahn strikes the arrogant Monetarist down. When Ilberd "confesses" to murdering Nanamo, Raubahn attacks him. He can hold a grudge to those who wrong him and the sultana, as when Lolorito Nanarito uses him and the conspiracy towards the sultana to further his agenda. Despite this, Raubahn has enough clear thought and reason to bury ill-feelings and move forward.

Upon the events of Final Fantasy XIV: Stormblood Raubahn becomes more involved in the liberation of his homeland, showcasing his abilities as a gifted and charismatic leader, both on and off the battlefield. He calms the angry mobs who cry for the death of Fordola rem Lupis. Though Raubahn was happy to see his homeland free from the Empire, and part of him wants to stay, he wishes to honor his vow towards the sultana. Nanamo sees that Ala Mhigo needs Raubahn more than she does, and releases him from her services. Though saddened, Raubahn remains resolute and stays in Ala Mhigo and endeavors in the efforts to rebuild his homeland.

Raubahn was developed for the Seventh Umbral Era storyline. He is named after Raubahn from Final Fantasy XI, captain of Empire of Aht Urhgan's Immortal Lions.

A miniature doll in Raubahn's likeness can be summoned as a minion through the "Wind-up Leader" item if the player is allied to the Immortal Flames.

He is voiced by Hiroki Yasumoto in the Japanese version. 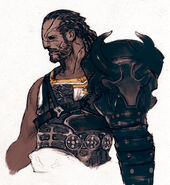 Raubahn in an artwork

Raubahn on the Death Unto Dawn patch artwork

Raubahn alongside the other two Company leaders

Raubahn battling in The Fringes 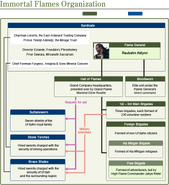