Rasp (ラスプ, Rasupu?) is a recurring spell in the Final Fantasy series, appearing only in the online installments. It is commonly an earth-elemental enfeebling spell that deals damage over time to a target.

A similarly named ability also appears as a recurring MP damaging spell in Final Fantasy VI and the Final Fantasy Tactics Advance series of games. However, this spell is known as "Raspir" (ラスピル, Rasupiru?) in the Japanese versions of the respective titles.

Rasp is an Earth-elemental spell that deals Earth damage over time and lowers an enemy's Dexterity. It negates the Shock spell's effect and is negated by the Choke spell's effect. Rasp, Drown, and Frost are a family of compatible effects that can all stack together. Burn and Rasp also stack.

Rasp appeared as an ability in Legacy version of Final Fantasy XIV. At the initial release, Rasp was a spell learned by Conjurers at rank 12 and cost 3 action points to set. The ability inflicted earth-elemental damage over time and also reduced earth magic defense to all enemies within an area of effect. After the release of patch 1.20, Rasp; along with Rasp II, became unusable by any class.

In addition, an upgraded version called Rasp II also appeared as an ability. The spell could be learned by Conjurers at rank 36. The ability inflicted earth-elemental damage over time at a higher potency and also reduced the earth magic defense to all enemies within an area of effect.

Currently, neither Rasp spells have appeared in the relaunch of Final Fantasy XIV.

Rasp was an ability with two variations; one with a rarity of Rare, and the other with a rarity of Rare Plus. The Rare Plus version had a base Attack of 930, and a base Defense of 910. Its maximum level was 80, had a cost of 14, it was an Intelligence ability, it was Earth elemental, and its leveling rate was normal. 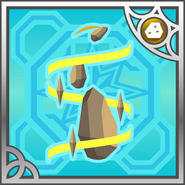 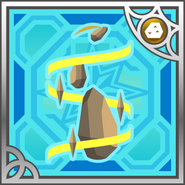 Rasp is an English verb meaning is to scrape or file down. Since many iterations of the spell throughout the series involve damaging a target's MP, or dealing damage over time, this definition is likely the most appropriate.