Detects by Sound
Tracks by Scent
List of Raptor Enemies
Raptor is a genus of enemies in Final Fantasy XI.

The reptilian answer to the tiger, raptors are agile, fast, and vicious hunters in their own right. Although they are found in several areas such as caves, open wastelands, rugged mountainous terrain, and dense brush, the majority of raptors share the same pale white skin and blue stripes. The species that reside in the woodlands are green to match their surroundings. Their strong hind legs propel them at speeds that make it difficult for prey to escape, but their vestigial wings are too small to provide flight. Whether it be by claw, jaw, tail, or breath attacks, raptors can hold their own if threatened. It is interesting to note that where there are raptors, there are usually cockatrice around, which leads to the speculation that raptors feed on these slower-moving creatures.

As for value, the skin of the raptor is a valuable material to leathercrafters who can synth it into an armor set, as well as a mantle and weapon strap. The skin is also used to make the hilt of several bladed weapons and lining for armor due to its soft, supple texture. 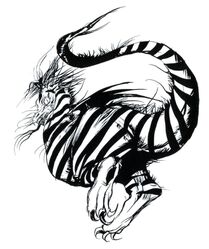 ) of the Wyverns from Final Fantasy. 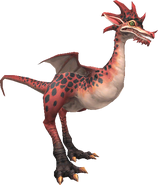 [view · edit · purge]Birds of prey, also known as raptors, hunt and feed on other animals. The term "raptor" is derived from the Latin word rapere (meaning to seize or take by force). These birds are characterized by keen vision that allows them to detect prey during flight and powerful talons and beaks.

The term "raptor" may also refer to a small dinosaur with the same characteristics as a bird of prey, such as the Velociraptor.

One of the species is Yowie. [view · edit · purge]The Yowie is a mythological character in Australian Aboriginal folklore. It is a creature that is a mixture of a human and an ape with red eyes and large canine teeth.

One of the species is Rahu. [view · edit · purge]In Hindu tradition, Rahu is a severed head of an asura, that swallows the sun causing eclipses. He is depicted in art as a serpent with no body riding a chariot drawn by eight black horses. According to legend, during the Samudra manthan, the asura Svarbhānu drank some of the amrita (divine nectar). The sun and moon realized it and alerted Mohini (the female avatar of Vishnu). Mohini cut off Svarbhānu's head before the nectar could pass his throat. The head, however, remained immortal due to the effect of amrita and became Rahu.