Faith offers no shield against Sky Mantra, for words are treacherous things.

Rapha Galthena is a character from Final Fantasy Tactics. She possesses a rare ability called Sky Mantra, which, along with her brother Marach's Nether Mantra, is coveted and exploited by Grand Duke Gerrith Barrington of Riovanes.

Shortly after Rapha and Marach were born, Grand Duke Barrington arrived in the village seeking to take the children to use their Sky and Nether Mantra for his own purposes. When the town leaders refused, Barrington had the village razed and kidnapped the two youths. Rapha grew up believing Barrington has saved them and was tricked into serving him as part of the Khamja, an elite assassination team in the Fifty Years' War.

After discovering that Barrington was responsible for their village's destruction, Rapha confronted the Duke. She suffered cruel mistreatment and the Duke went so far as to rape Rapha, leading her to realize his true nature. She longed to escape Barrington and to have revenge. The children grew up, but Rapha was never able to convince Marach of the truth.

When Barrington gets involved in the battle between Ramza Beoulve and the Lucavi, he dispatches Rapha and Marach to deal with Ramza. After Marach informs Ramza that his sister, Alma, is being held at Riovanes, Marach waits for Ramza in a nearby town with several of Barrington's soldiers. As Ramza approaches Rapha tries to convince her brother of the truth.

She fails, and when Ramza arrives, she defects. Ramza rescues her and drives Marach off. Rapha tells Ramza about Barrington, but Marach has disguised himself as a frog and overhears the conversation. He threatens to have Alma harmed unless Ramza and Rapha bring the Scriptures of Germonique to Barrington.

Battle on the Roof[]

Ramza and Rapha approach Riovanes Castle where they run into Marach. A battle ensues, and Rapha sees she cannot convince her brother of the truth. She teleports away and Marach follows leaving Ramza and his forces to fend for themselves against the remaining guards. As Ramza infiltrates the castle and fights Belias, Rapha confronts Barrington, who had escaped a foul encounter with Hashmal, on the roof of the castle. Rapha aims her weapon at Barrington, but is paralyzed with fear and memories of the rape and cannot bring herself to attack.

Barrington gloats over his apparent victory, but is unaware Marach had overheard him. Marach emerges from his hiding spot, now aware of the truth. Enraged, Barrington pulls out a gun and fires at Rapha, but Marach knocks her out of the way and takes the bullet himself. Ramza, having defeated Belias, comes up onto the roof. Barrington demands Ramza hand over the Zodiac Stone, but is thrown off the roof by the Ultima Demon, Lettie, disguised as a human girl. Fellow Ultima demon in disguise, Celia, and Marquis Elmdore, reveal their presence, and the three attack Rapha. Ramza drives them off, but Marach dies.

Rapha senses something unusual in the Scorpio Stone and activates it, but instead of summoning a Lucavi, it restored Marach to life. Ramza, Rapha, and Marach scour the castle for Alma, and failing to find her, determine Folmarv Tengille has her. Rapha and Marach join Ramza's entourage to defeat the remaining Lucavi.

Rapha's default and exclusive job is the Skyseer, is a magickal job that uses powerful but random strikes to take down enemies, which ignores Faith. Out of all unique characters in the game, Rapha has the lowest starting Bravery, making her the most useful for getting rare treasures using the Chemist's Tresure Hunter ability.

Rapha is a guest character from the Walled City of Yardrow until the end of Chapter III. She starts as a level 22 Skyseer with 31 Bravery, 69 Faith, and comes equipped with the Musk Pole, Celebrant's Miter, White Robe, and Elven Cloak.

When fought in the eleventh Rendezvous battle: All-Star Melee, she is two levels higher than the highest level deployed unit. She starts with 31 Bravery and 69 Faith in her default job Skyseer, equipped with the Eight-Fluted Pole, Thief's Cap, Black Garb, and Septième. She has access to the Sky Mantra and White Magick commands, as well as to the abilities Soulbind, Swiftness, and Move +2.

When fought in the fourteenth Rendezvous battle: Brave Story, she is level 99 and starts with 41 Bravery and 69 Faith. She is equipped with the Eight-Fluted Pole, Thief's Cap, Black Garb, and Featherweave Cloak, and has access to the Sky Mantra and Items commands, as well as the abilities Nature's Wrath, Swiftness, and Manafont. 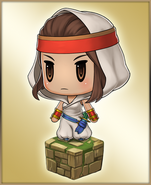 Rapha is a playable character who could be initially recruited during the Challenge Event Family Secrets as a First Time Reward for completing the event's Monastery Vaults - First Level stage on Classic difficulty.