With unparalleled tracking abilities and skill with the bow and arrow, rangers are experts in the field of hunting.

Though any race can play any class, Mithra's high agility offers them a slight advantage in terms of Ranged Accuracy, though Elvaan's relatively low accuracy does not discourage there from being a huge number of Elvaan rangers.

In order to become a truly great hunter, one must be accepted by mother nature. In order for that to happen, one must gain the fang of a tiger, the fanged king. But it does not sound like any old fang will do...

When a player becomes eligible to do the Ranger quest, known as "The Fanged One", at level 30, they can speak with Perih Vashai in Windurst Woods, a wise Mithra resident of Windurst. She informs the player that in order to follow the path of ranger, one needs a fang of the king of the tigers, but also so that the ranger might come to understand death.

The player must travel to the Sauromugue Champaign and find a cave in the South East portion of the map inside will be some old bones. After entering the cave, an ancient tiger will enter as well, and slowly die of natural causes. Upon its death, the player must inspect the remains and they can return to speak with Perih. She will grant the character the ability to choose Ranger as a job, as well as fashion the tiger fang into a "Ranger's Necklace". 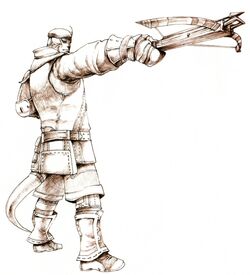 Ranger is a ranged attack job, proficient in the use of guns, bows, and crossbows. They also have reasonable melee ability where they can use swords, daggers, or axes. Rangers have the ability to track through the use of Widescan, one of their job abilities, but otherwise focus mainly on dealing heavy damage. They are also the only job that has the ability to use ranged weapon skills so a character wishing to use these powerful attacks must either be a ranger or take the Support Job of Ranger.

Rangers typically use Ninja for their support job because spells like Utsusemi help the ranger avoid hits while pulling (the act of bringing an enemy back to the party to fight). Ninja also allows a ranger to wield two weapons. Considering the version update that changed ranged attack and ranged accuracy to physical distance, damage from melee weapons is secondary for a ranger when compared to his ranged attack and melee weapons are only held for the purposes of boosting those ranged attacks (through bonuses found on those hand to hand weapons) so the use of two such weapons will increase the effectiveness of a ranger's ranged attacks. Since ninja is a high agility job, having ninja as a support job will also provide a moderate increase in accuracy over other jobs.

Warrior is probably the second most common of all ranger support job choices. Rangers in this setup will experience a great increase in damage for a moderate hit to accuracy from the loss of a second melee weapon that they might otherwise have been afforded with ninja. Berserk is used to further increase damage. Additional damage can be done by equipping a Fire staff or Vulcan's staff as an alternative since Warrior as a support job does not allow Ranger to equip two weapons. Though the Fire staff is not used to directly hit the mob itself, the weapon's stats give a Ranger a boost in ranged attack and strength.

Samurai is the third most viable support job for Rangers. The job adds two major bonuses for rangers; the trait Store TP and the ability Meditate. A Ranger with this choice of support job will be able to throw many more weapon skills at an enemy than any other job combination thanks to the presence of these two abilities, increasing the TP gained per successful hit up to 20% with some guns. Third Eye may also be used to negate one attack versus the Ranger every 30 seconds with the use of Seigan, offering a slight defensive advantage over Warrior, but the Ranger/Samurai will still lack the second melee weapon a Ranger/Ninja would have. With this support job it is also recommended to equip a Fire staff or Vulcan's staff for increased ranged attack and strength stats.

Concept art of a Ranger.

Promotional artwork of the Ranger by Yuzuki Ikeda.

A Mithra Ranger in Artifact Armor.