Nature-loving archers who can call on local wildlife for aid.

The Ranger, also known as Hunter, is a job in Final Fantasy V and part of the Fire Crystal job set, although the actual shard is found in a chocobo gullet later on.

The Ranger is the only job outside of the Freelancer and Gladiator that can equip bows, which allows them to deal full damage from the back row. While bows have a low accuracy compared to most other weapons (roughly 70% accuracy, if not lower), the Ranger gets around this with their innate Aim command, giving them 100% accuracy with any weapon. The Ranger has decent Strength but low Stamina, making them prone to magic attacks, as the Ranger has no way to boost Magic Defense.

Rapid Fire is among the most powerful physical commands in the game, which can be exploited in the notorious "Spellblade - Dual Wield - Rapid Fire" combo.

Mastering Ranger in all four characters in the mobile and Steam versions earns the player the achievement "Marksman".

The Ranger class represents animals and nature, and so the color green is used in their outfit. A feather is also donned by all characters, whether on headgear or alone. Lenna's costume resembles the Bard from Final Fantasy III.

The Ranger lacks innate support abilities, meaning that mastering it will have no benefits to the Freelancer or Mime class, but it is still an interesting job. Aim usually never misses, making it preferable to Attack, and Rapid Fire is almost a must-have for physical attackers end-game.

Rapid Fire's third and fourth hit will not dispel Sleep, Control, or Confuse, will not provoke any counters, and is unblockable. Any special abilities or effects weapons may have will not be activated when using Rapid Fire.

Equip Bows gives characters the Ranger's base Strength and Agility unless otherwise at a higher value.

Upon mastery, Freelancers and Mimes gain the Ranger's base Strength, Agility and Stamina unless they already have a higher base from another mastered job.

Aim is the Ranger's innate command ability, and they can equip bows by default. Leveling up the job allows the player to use these abilities on other jobs of the same character as well. 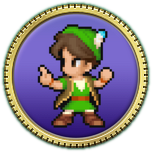