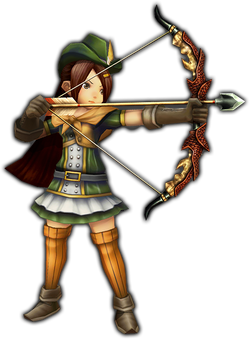 Rangers specialize in long-distance physical attacks, with a multitude of abilities that inflict status ailments on their foes.

Ranger (狩人, Karyuudo?) is one of the jobs available in Final Fantasy Explorers.

The Ranger is unlocked after the 1★ Tutorial Quest, "Ability Mutations Exam". It can be mastered by completing any 10 quests, then the 5★ quest "Mastery Trials: Ranger".

The Ranger is an effective long-range damage dealer and booster. They can initially equip bows and axes; after mastery dual axes, dual daggers and dual clubs can be equipped.

They are proficient in all Bow Skills.