Sachiyo Soeda
The Ranger is a wind-elemental Eidolon from Final Fantasy Dimensions II. The signet can be obtained for Maina as a first-time completion reward for completing the thirty-first floor of Babil Tower.

If obtained at the moment of the start of the game's Eureka arc, the Ranger will provide Maina with a boost for her HP, attack, and speed stats. However, the signet has below average MP bonuses. If its passive is unlocked, it will allow Maina to have a 22% shorter charge time to activate her abilities, which can allow her to nearly instantly grant buffs to the party at the start of a battle. Despite being able to obtain the Ranger at the start of the Eureka arc, the signet can still be used by Maina during the post-game challenges, mainly due to its stats and passive ability.

The Ranger is based on the recurring job class in the series, being a skilled archer wielding a bow. She wears a variant of the traditional Ranger gear that includes a green colored tunic, skirt, and feathered hat. She also wears a scarf, a pair of black stockings, and brown ankle-length boots. As she evolves, her hair changes from brunette to blonde and her scarf changes colors.

Her final form depicts her outfit adorned with golden laces and her weapon transforming into a large golden bow. In addition, the Ranger's final artwork depicts her surrounded by wolves, referencing the Ranger's ability to call upon the help of animals in the series.

The following are the abilities Maina can learn from the Ranger:

In the original free-to-play versions, the Ranger was a rare limited-time signet that could only be obtained through participating in the "Plaisir of the Gale" raid event in Final Fantasy Legends: Toki no Suishō. It allowed the wielder to use Rush Shot abilities and could be equipped by all party members. The rank of the Ranger signet depended on the player's participation in the raid event. If the player participated enough, they would received a rank 8 Ranger that allowed them to use the Rush Shot IV ability. The Ranger was a rank EX signet. 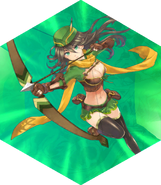 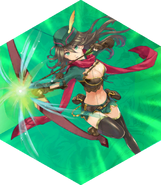 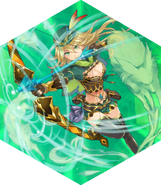