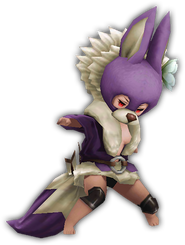 Masters of the bow skilled at targeting specific monster families.

The Ranger (狩人, Karyūdo?) is an asterisk that appears in Bravely Second: End Layer. It is obtained after defeating Artemia Venus.

The Ranger is a physical damage focused job, that can deal high damage to monsters with their Hunting abilities, aided by their innate ability Precision.

The Ranger's specialty is Precision. Its job command is Hunting.