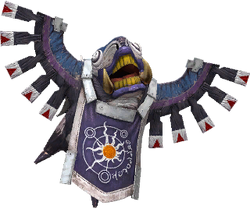 The Rangda (ランダ, Randa?) is a recruitable monster in Final Fantasy XIII-2. The only way to obtain its crystal is by activating the Mog's Manifestation Fragment Skill and by throwing Mog into the sea from the pier of New Bodhum -003 AF-, or by fighting Valfodr at level 1. The crystal has a 3% chance to drop from Valfodr, and is considered a rare item drop. Therefore, a Collector Catalog and/or a higher battle rating will improve drop chances, but the Monster Collector Fragment Skill won't.

Rangda is a Saboteur and its development is weighted towards magic, it learning many magic abilities. Rangda casts same magic that Serah can access, with the sole exception of Endless Nightmare. Rangda's stat development begins quickly, then slows down midway through, before accelerating again towards the end.

Rangda's main asset is its innate resistance against magic attacks and all status effects, plus it learns additional passive resistance against Fog and magic during its development. It also has the red-locked (meaning it can't be overwritten or gotten rid of) Feral Fatigue passive ability, so the player is advised only to use its Feral Link near the end of battle.

Rangda development chart.
Add a photo to this gallery

[view · edit · purge]Rangda is the demon queen of the Leyaks, according to traditional Balinese mythology. Terrifying to behold, the child-eating Rangda leads an army of evil witches against the leader of the forces of good—Barong. Rangda is important in Balinese culture, and performances depicting her struggles with Barong or with Airlangga in that tale are popular tourist attractions as well as tradition. She is depicted as a mostly nude old woman, with long and unkempt hair, pendulous breasts, and claws. Her face is traditionally a horrifying fanged and large-eyed mask, with a long, protruding tongue.

Retrieved from "https://finalfantasy.fandom.com/wiki/Rangda_(Final_Fantasy_XIII-2)?oldid=3205915"
Community content is available under CC-BY-SA unless otherwise noted.